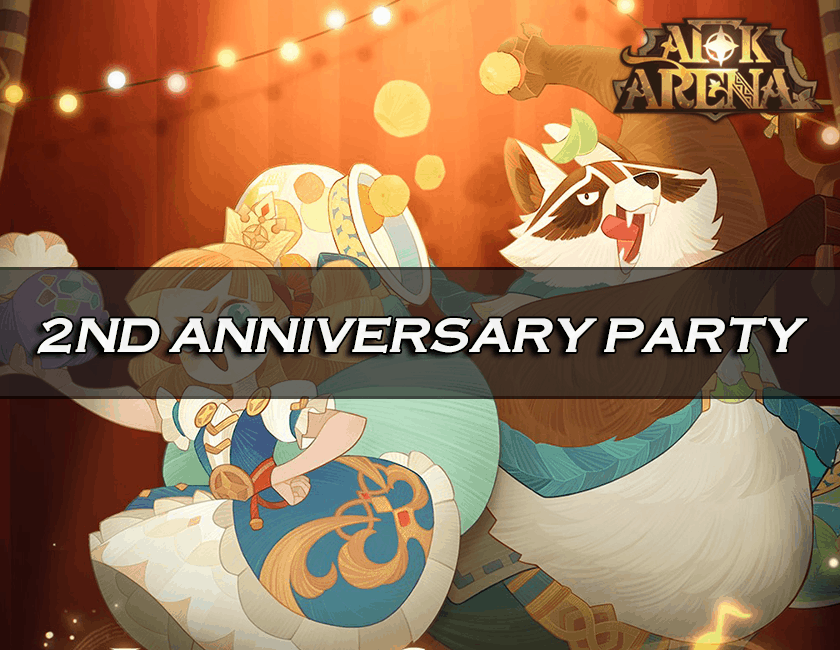 AFK Arena is 2 years old! To celebrate this, there is an in-game “Anniversary Party” event happening right now.

There’s also an AFK Arena Anniversary Code that can be redeemed for some epic rewards.

Two new skins are being released for the event!

This skin is a free reward from the new adventure “The Forest Escapade”.

This skin can be bought.

This a brand new adventure made only for the event! More areas of the map will unlock each day.

It should be noted that this adventure can’t be reset.

Players can acquire an abundance of rewards within the Forest Escapade during the event period.

A player’s own heroes and enemy heroes shall all start each new battle with full health and zero energy.

During the event, all hero gear (including unadorned parts) is Mythic T1 and include Faction Bonuses but are un-enhanced. If a hero is already equipping Mythic T3 gear, their Hero Bonuses will be retained.

The strength of enemies is based upon each player’s own strength. Enemies’ strength levels will not change during the event.

Instead of fighting certain camps in this adventure, you have to bet on which team you think will win.

If a player incorrectly guesses the outcome of a battle, they must then battle against the winning side to claim the rewards.

At the “Thicket Lodge”, you can exchange Acorns for items that will improve your Combat Rating.

Acorns can be acquired by defeating camps on the map.

Relics are only effective against Phantom Bosses in the current Forest Escapade instance.

There’s 5 bosses, each with their own set of skills. You’ll have to face them all at the same time in each battle.

The health of Phantom Bosses is determined by the quantity of active players on all servers. After a certain amount of damage has been dealt against the Phantom Bosses, all players that participated in battles can claim Chest rewards. Players who do not claim their Chest rewards will receive them via their mailbox after the event has concluded.

During the event, all hero gear (including unadorned parts) is Mythic T1 and include Faction Bonuses but are unenhanced. If a hero is already equipping Mythic T3 gear, their Hero Bonuses will be retained.

Players are able to challenge bosses 5 times for free daily, after which the expenditure of diamonds will be required in order to continue challenging bosses. Players may refresh boss challenges up to a maximum of 10 times. One battle challenge attempt will be deducted each time a player enters a battle.

Only one mercenary may be used per battle against Phantom Bosses however, the number of times that a mercenary can be used is unlimited.

Phantom Bosses will stack attributes and grow stronger every time a certain amount of their health is lost.

Only the highest recorded daily damage dealt against Phantom Bosses will count towards your final ranking. Your final ranking will be determined at the end of each session.

Players will receive Gold for challenging Phantom Bosses, and will receive additional Gold for exceeding their daily damage record.

This is the best team for the Phantom Bosses so far:

The Phantom Thicket Leaderboard is a leaderboard that ranks the highest damage each player deals per day to the Phantom Bosses.

Phantom Thicket Leaderboard guild rewards will be gradually sent out via email once the daily rankings have been calculated.

The first time Raku brought a friend into the Dark Forest from the outside realm, he never expected that they’d get swallowed by the illusory mist of the Phantom Veil Thicket, and wound up lost and confused!

The Phantom Veil Thicket surrounds the Dark Forest, enshrouding everything in a thick mist that never dissipates no matter the season. In that mist are illusions, created to keep non-forest folk out of the Dark Forest, ensnaring them in vivid falsehoods and driving them out in confusion.

The Phantom Veil Thicket used to be a simple barrier of protective nature magic. However, right now the mystical powers of the Thicket have “trapped” Raku and his outsider guest. Will they be able to find a way out?

You can unlock the hero chest sooner by solving the clues and finding the musical note each day.

Clue 2: Go to The Oak Inn and find the little dwarf in the bottom left corner (If you don’t have it unlocked you’ll need to visit a friends inn).

Clue 3: Go the The Noble Tavern and check the table under Dolly.

During the event, players are able to claim up to 7 daily login rewards.

In addition to daily login rewards, a final reward chest will be unlocked on day 14 of the event. Players can unlock this reward chest in advance by illuminating Musical Notes.

Players can tap on each illuminated Musical Note to play its corresponding tune. When players illuminate all of the Musical Notes and claim the final reward chest, the complete musical score can be played.

The main rewards for this are:

This is a unique feature of the event. It allows players to look back at different records for their own account and the game in general.

A adventure in the Voyage of Wonders is also being released with the event.

Angelo traveled all across the land making a great many friends who shared in his love of music.

The Noble Tavern is about the hold a grand music festival, and Angelo has entrusted you to deliver the invites.

Here’s where it gets tricky… He only knows their nicknames, “Soul Singer”, “The Musical Rose”, “Kingpin” and “Pop Prodigy”. He doesn’t have a clue what their real names are, let alone where to find them.

Seems there’s nothing else for it but to start the search! First, let’s look for the music- loving Wilder.