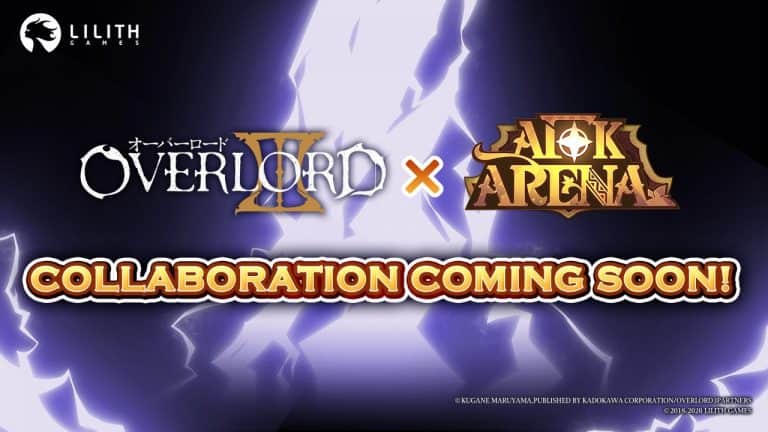 AFK Arena will be having a crossover event soon with the popular Japanese anime Overlord!

Ginnungagap
Albedo instantly teleports to the most densely populated area of enemies and deals AoE damage to all nearby enemies. A percentage of the total damage dealt to her enemies is converted into a shield, which has a duration of 8 seconds.

Black Guard
Albedo receives a shield with a value equal to a percentage of her Attack Rating, after which she teleports next to the backline ally with the lowest health and protects themt While the shield exists, neither Albedo nor the ally she is protecting can be controlled by enemies and Albedo shall bear all of the damage intended for that ally. If the hero “Ainz Ooal Gown’ is an ally, Albedo will prioritize him with this ability above all other allies.

Shield Lord
Albedo teleports next to a random ally that is currently near an enemy and deals damage to the enemy, stunning them. If the hero ‘Ainz Ooal Gown’ is an ally, Albedo will prioritize him with this ability above all other allies.

Hermes Trismegistus
During battle, Albedo’s Crit Resistance is increased. If Albedo is dealt a Critical Strike, the attacker’s Attack Rating is reduced. This ability cannot be stacked.

Fallen Down
Ainz begins a chant which lasts for a few seconds, after which damage is dealt to all enemy targets. If his chant is interrupted, Ainz will recover Energy points.

The Goal of All Life Is Death
After a 30 seconds of battle, all enemies lose a percentage of their current health and are stunned for seconds.

Steady Preparations
At the beginning of battle Ainz receives a shield equal to a percentage of his max health, which lasts for a few seconds. While the shield exists, Ainz is immune to enemy control abilities and continues to chant, gaining Energy points and a permanent Attack Rating and Defense Rating attribute increase per second. Once the shield disappears, Ainz ceases chanting.

Maximize Magic
Every 12 seconds during battle, the damage and debuff duration of the “Magic Caster” ability are increased by 150%. The effects of the ability “The Goal of All Life Is Death” will take effect 20 seconds into battle.