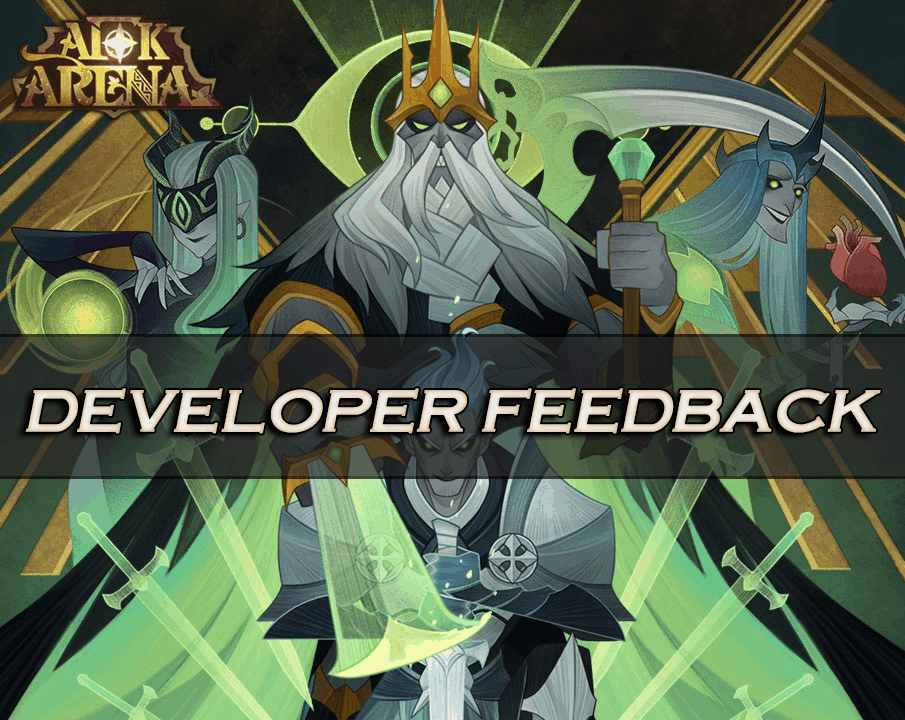 Each week some of the game developers working on AFK Arena sit down and answer the most popular suggestions that were submitted on the official Discord server.

indicate status effects on the portraits when fighting to know what effect the hero is under. Like maybe everything is red out. Also do this with buffs, and another for immunities. Everything happens so fast in a fight sometimes you can’t track these stuff to trigger cleanses and other ultimate abilities

Feedback:
Good advice! We have already tried implementing similar features before, but their performance wasn’t good enough, so in the end we decided not to release it. That doesn’t mean that we won’t try other ways to bring you this feature.

Although this seems far-fetched, is it possible to have more summons (besides regular, faction, and companion)? I’d love it if we could pay 500 diamonds for a guaranteed elite FODDER (L+ tier) hero summon. Maybe even let us spend 2700 (or a lot of diamonds) for a guaranteed elite (A tier) hero summon. It would make the game easier, and it could even tempt people to spend more money (knowing they’ll get worthwhile rewards).

Feedback:
Thanks for the suggestion, we will discuss it internally and let you know of any news resulting in it!

Add a new Peaks of Time, with a useful Dura’s artifact!

Feedback:
Thank you for your suggestion! Peaks of Time are a constant work in progress! It’s not completely impossible for more artifacts (or artifact-like items) to appear there in the future!

Feedback:
Gwyneth is a very strong woman (which you can see described well in her story). To represent that, she is positioned as a strength hero.

Award companion points for mercenaries rented out that finish a stage. This makes sense and encourages people to rent out heroes. This won’t give away too much sinces its just a weekly thin

Feedback:
We are working on improving the mercenary system, please look forward to it!

To work on Guild Siege Functions or more content to guilds. Maybe generating more Gold in a guild or perhaps some quests

Feedback:
Actually, we are already designing a lot of tasks related to the guild, increasing the interaction between the members of the guild and as a result letting you collect more loot! First major updates in that area should be available in the upcomig next version of the game!

implement “hard mode” and “easy mode” for future voyage so people wont complain about voyage being “too hard”. reduced rewards to be given to easy mode so as to reward those who attempted hard mode. You can switch between hard and easy mode as and when u want, but after obtaining one of the rewards on either of them you can no longer switch, but can only reset ur voyage based on that difficulty.

Feedback:
Voyage of Wonders is not a one-off event and we will adjust the difficulty of the future version according to players’ ATK rating. We might also include some additional achievement tasks to the future Voyages as an extra incentive!

Feedback:
We believe that the post-battle breakdown should show the data that players care about the most, hence we focused on displaying those 3 specific battle statistics. We will however later optimize the feature so that players can have access to more detailed data (such as the source of damage).

Feedback:
We will consider adjusting the existing VIP rewards in subsequent versions of the game, and hope that the adjusted rewards will satisfy everyone.

Feedback:
Whether it’s a new hero or an old one, we will continue updating the library with more unions and add interesting background stories.