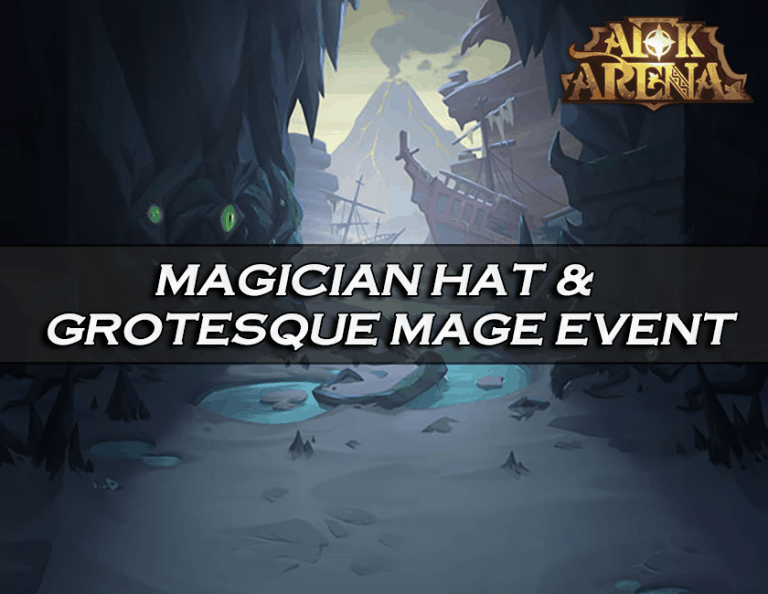 Two new connected events will be arriving in AFK Arena soon! As of now, it lasts for 2 weeks. Only 12 days of that will reward currency though.

The featured event boss this time is the “Grotesque Mage” and he can be challenged once per day. A currency called “Arcane Scrolls” can be obtained from dealing damage to him. They can also be obtained from daily quest chests.

Arcane Scrolls can be used to draw random rewards from the “Magician’s Hat” in the Arcane Room. Every 10 pulls will reward another currency called “Circus Medal“. These medals can be exchanged for heroes and a few other rewards.

How Much Currency Can You Get?

This is enough for one free copy of a Celestial or Hypogeon hero (90 medals).

These calculations do not include the event deals, which basically unlock an almost unlimited amount of currency. If you want to get a little extra, the cheapest pack is $1 for 60 Arcane Scrolls per day.

Grotesque Mage will disappear after your heroes have cast 6 ultimates. This means that you’ll have to turn auto off and manually cast ultimates a maximum of 5 times in the fight.

The usual good combo for this is either Shemira + Rosaline, or Shemira + Twins.

Saurus is also good for this fight as most of his damage doesn’t come from his ultimate. He can even solo it. However, it may require high ascension / SI.

Teams comps that have worked:

By Completing daily tasks whilst participating in the Grotesque Mage event, players can obtain Magic Tickets.

Players in the Magician’s Hall can use Magic Tickets to obtain random rewards.

Players are awarded Circus Medals according to the number of draws made. Circus Medals can be exchanged at the Gift Cart for fabulous prizes.

Magic Tickets will be recalled for 9k Gold Coins per ticket once the event has concluded.

Players will have the opportunity to challenge the Grotesque Mage once per day.

Players are awarded Magic Tickets according to the amount of damage done to the Grotesque Mage.

Players can use Magic Tickets to obtain random rewards at the Magician’s Hall.

The Grotesque Mage’s difficulty will be determined by each player’s own combat rating.

Periodically, the Megamouth Shark Troupe will tour the Royal capital Savannah for half a month. These packed tours attract people from all over sending ticket prices skyrocketing. Performances include knife juggling, fire-breathing, trapeze artists and the ever-thrilling Magic Hat trick.

Kuilin City is recognized as Esperia’s capital of arts. Opera, painting and music blend together harmoniously to create the city’s atmosphere, giving rise to countless artforms and great fame, becoming a resplendent jewel in the field of the arts. No matter if it’s Prince Leicester, Kuilin City’s high society, or the commoners, everyone has artist sensibilities.

The passion and inclusiveness of the Kuilin City folk have for art has attracted performance artists from all over the world. The city has a large number of big theaters and, as well the famous Megamouth Shark Troupe, there are hundreds more from all over showing off their unique skills on the stage. Among them is the one known as Gaston “There’s no magic in the world I can’t do” the Master Mage.

It’s a full-house at the Golden Theatre. Master Gaston holds his breath as he prepares to “sever” his head from his body. This performance would prove to be the most terrifying show in history. The process of rejoining the head to the body never came. One moment were waves of applause, a moment later becoming a torrent of screams. Green-eyed and ringlet-curls of blonde, a handsome skull rolls down the gorgeous stage. The entire audience was terrified. A lady in the front row saw the rolling head with her own eyes and even caught it in her arms, she’s still in hospital repeating crazy nonsense about ghosts and spirits.

In any case, it wasn’t long before Kuilin City’s resident’s attention to this “accident” was drowned out by other more exciting news. People eulogize art, pursue hotspots, not caring for that which cannot be seen, like gangrene on the city’s bones, lingering in it’s shadows.