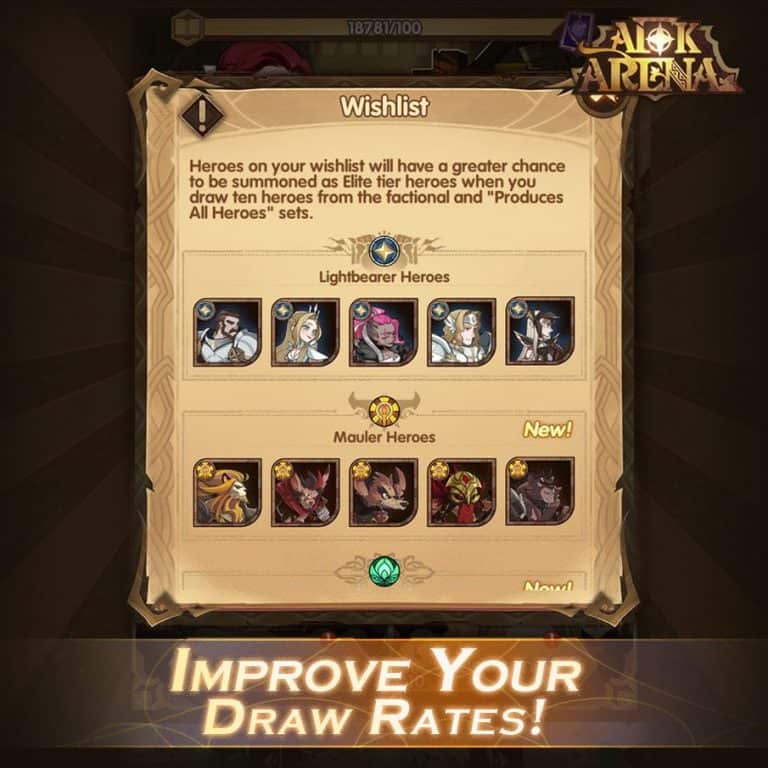 The draw rates for heroes has been a hot topic in the game for a while now.

In response to the community feedback, Lilith have announced via Facebook that they’re adding a new feature in patch 1.17.01 that will allow players to a create a “Wishlist” for heroes.

The wishlist will be accessible via the Noble Tavern. It will be unlocked for players once they beat stage 4-4.

It seems that individual summon attempts will not have an increased chance to summon heroes in the wishlist.

Also, you don’t need to fill up the wishlist for it to work, which was a worry for the graveborn faction as they currently only have 5 ascended heroes. You can just pick the heroes you want for each faction.

This is definitely an improvement and should help lessen the RNG of acquiring heroes. It doesn’t quite solve the core issue of having so many trash green heroes in summons though, but it’s a start.

You can add up to 5 heroes per faction to your hero wishlists for a total of 20 heroes.

Elite heroes have a greater chance of matching your wishlist heroes if any Elite heroes are produced however the overall odds of Elite heroes being produced is not affected. (This was updated in a hotfix)

Removing all heroes and leaving only one hero in the wishlist will not increase the odds of that hero being produced.

Hypogean and Celestial heroes cannot be added to wishlists.

When selecting heroes for your wishlists, newly added heroes will have the word “New” displayed on their portraits, to help you more easily find and add the newest heroes to your wishlists.

This FAQ was released by Lilith Games on Facebook to clarify how the wishlist feature works.