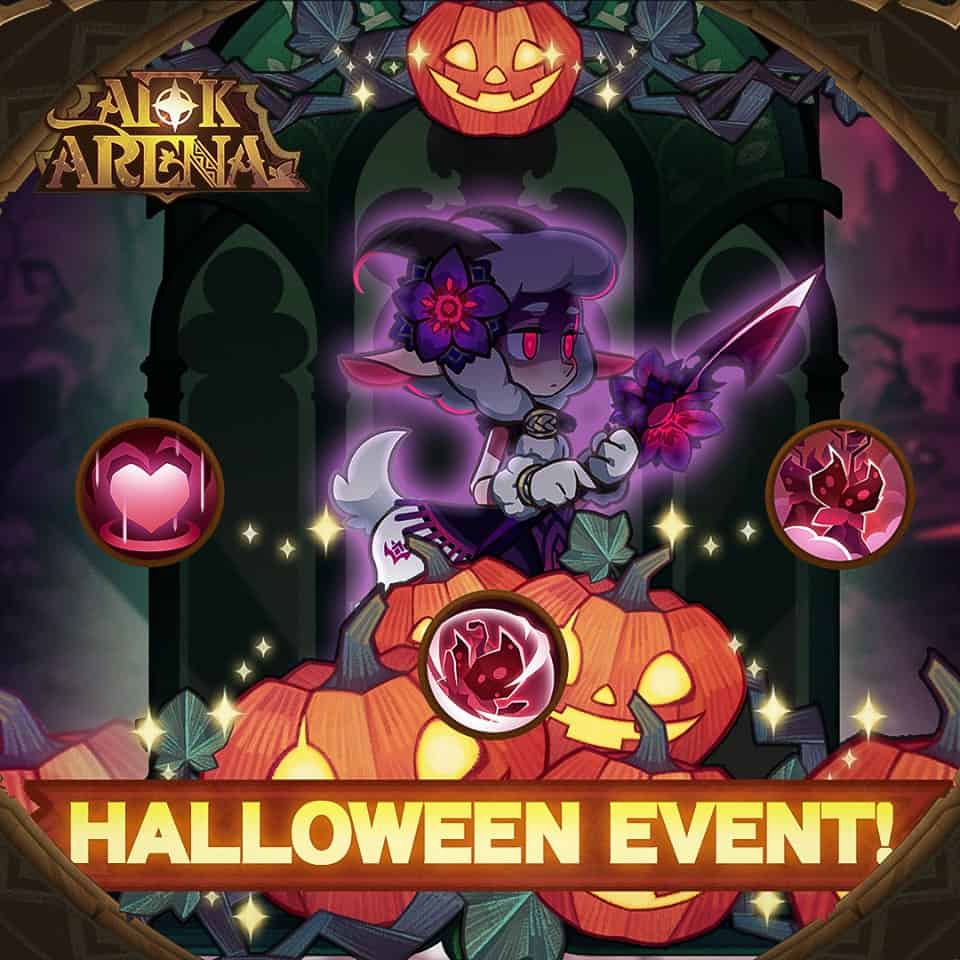 A Halloween themed event is now active on AFK Arena! It lasts for a total of 21 days, so there’s plenty of time to do it!

The event unlocks after completing chapter 3 of the campaign.

This is a special boss for the event. Players are able to do battle with her twice per day while the event is running.

Evil Nemora is impervious to attacks and she cannot be controlled or killed during battle.

The strength of Evil Nemora and her minions is determined according to the player’s own combat rating.

Evil Nemora cannot be attacked, but she summons Dreaf minions that must be killed. The more you kill, the more creepy candy you can acquire.

You should aim to use AoE DPS and Buffers to acquire the maximum amount of candies (44) for each attempt.

The most important combo of heroes for your team is probably Shemira + Rosaline.

A candy with a demonic twist, this item can be acquired by defeating Demonic Nemora’s minions in combat. Candies may be exchanged for a variety of exciting rewards (Note: This item will be removed when the event is over).

You can spend it by tapping on the little “Exchange” icon in the bottom right corner of the event page.

Imbued by Zolrath with the power to control time, this hourglass is able to remove the 12 hour reward time limit from AFK Rewards while this event is underway (Note: This item will be removed when the event is over).

This is a random reward from the one-time only gift that you’re given. Not everyone will receive it.

The highest value heroes to obtain are probably: Lucius, Shemira, Rosaline, Elijah & Lailah, Mehira. However, keep in mind that the celestial and hypogean heroes are much harder to ascend in the long run. It will obviously depend on what your current team consists of as well.

The Faction Scrolls are very good value, especially when you can get bonus signature item upgrades from summoning heroes.

The Stargazer Tokens are also reasonable value too if you’re feeling lucky, but the chance to acquire heroes from it is VERY low.

The scourge of the invader has withered great swathes of the forest. In glades and groves, the rot spreads, bringing death with it. The woodland’s defenders are not immune to this corruption, and Nemora discovered this the hard way. Her motivations for protecting her home were originally as pure and noble as any other Wilder’s, but one encounter after another with the enemy gradually twisted her heart. She had seen so much blight, so much death, that her desire to protect the lives of the things around her turned into a fuming hatred of those responsible for cutting so much of it short. She began fighting to destroy rather than to preserve. She lost sight of her purpose, and the corruption took hold. With each passing day she grew more maniacal, turning the evil of the invaders around on them. She became an insatiable huntress, stalking her Hypogean prey through the dark woods, spear slick with gore. As she butchered her hapless quarry, an ever smaller light dwindled in her. She had become something else, and if she didn’t retake control, she would be lost forever. The rot threatened her very being. Sensing that her very essence stood on the edge of a great abyss, she began to muster her resolve.

She dug deep into the memories of the land and life. There appeared a vision of a hulking Treant, similarly afflicted. His form was twisted with pain and rot, but a great strength still kindled within him. She recognized him as Ulmus and sought the wisdom he and Arden had imparted on her. The vision shifted. She saw Ulmus struggle with the corruption and finally expel it. She saw the new buds and leaves sprout from his now healthy limbs. This gave her the inspiration she needed.

“I am the healer. I am the conduit of life. I am she who unbreaks the broken. The vitality of the forest is mine to direct. I cannot wither. I cannot be consumed.”

Her consciousness kicked and tumbled its way back in control. The evil in her began to slough away like a mouldering cloak. As it lost ground, she felt a new energy rising. She could feel every pulse. The blood in her veins sang with strength and triumph. Wisps of darkness, darker than the night, coalesced into a shadow which sprang away from the healer and disappeared through the trees. She breathed a sigh of relief. She was back.

The shadow rested, hiding in the dark places during the day and gaining shape during the night. It had been powerful enough that it would not disperse, nor would it be satisfied with a lesser host than the one it had previously inhabited. It began to more and more closely resemble the healer who had ousted it. A macabre mockery of one so pure. Upon fully regaining its form, its eyes flashed red. It looked into the benighted wood and smiled. The hunt was back on.

“This time, no one escapes.”