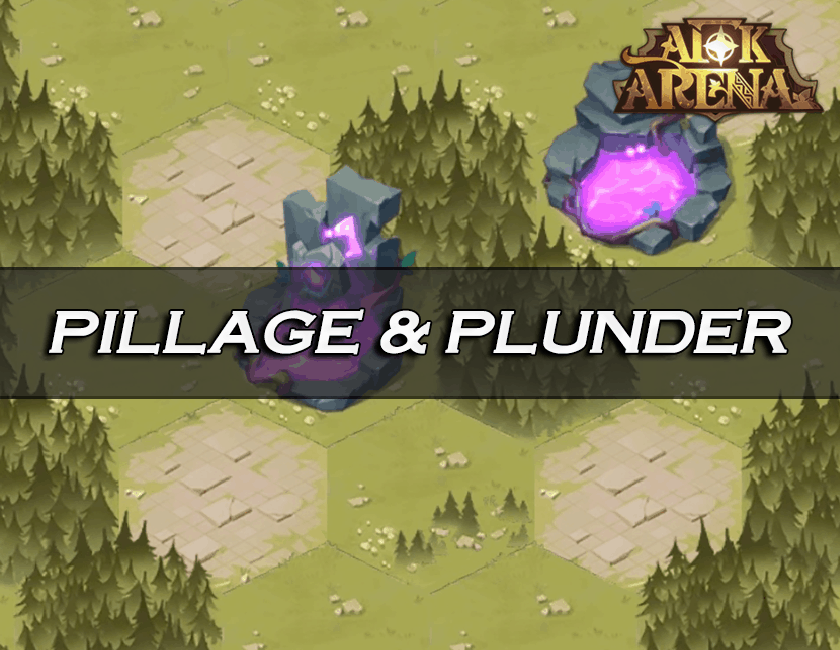 Pillage & Plunder is an old guild event that’s returned to the game!

The requirements for entry are to have completed stage 2-4 and have placed an encampment in your guild grounds.

This can all be done before the event begins.

Go to “My Camp” at the bottom of the Guild Grounds screen.

Setup your structures on the map and fill them with your best hero teams.

In the Guild Grounds, check for any exclamation marks from other player camps. Their camps need reinforcements, so place your best teams to help them out!

This setup is considered to be the most optimal. It forces the enemy to have to fight all 5 teams.

You can attack enemy players by pressing the Pillage & Plunder icon in the top left corner of the Guild Grounds screen.

You can only attack enemies when you’ve got “Balloon Fuel” and you’ll have 60 minutes to complete the invasion once it’s begun.

It’s worth rerolling opponents to get someone that hasn’t setup their base yet. This can be done 6 times for free.

The rewards for winning battles are Gold and Guild Coins.

Arcane Ponds found within players’ encampments are active while the event is underway and will generate re- sources that can be harvested.

During the event, players can place down defensive structures to fend off other players’ attacks.

Players can use the Balloon to find and then challenge other players of similar strength. Reaching their Arcane Ponds grants rewards.

Balloon Fuel is required to attack other players. All Arcane Ponds will produce one bottle of Balloon Fuel. When challenging another player’s territory, you may only fight a limited number of times. Each time a battle commences, one battle attempt will be consumed.

While the event is active, players can dispatch heroes to reinforce their guildmates. Dispatching heroes will not affect the player’s own encampment defenses.

Place to deploy your defensive teams.

Place to request help from your friends and guildmates. You can also leave your guildmates messages to request the hero you need.

Place to block other players’ paths.

Arcane Ponds generate resources every 12 hours. (You can collect the resources in the upper right corner in the guild page.)

Used to attack other players’ encampments. (Players will get 1 Balloon Fuel every 12 hours.)