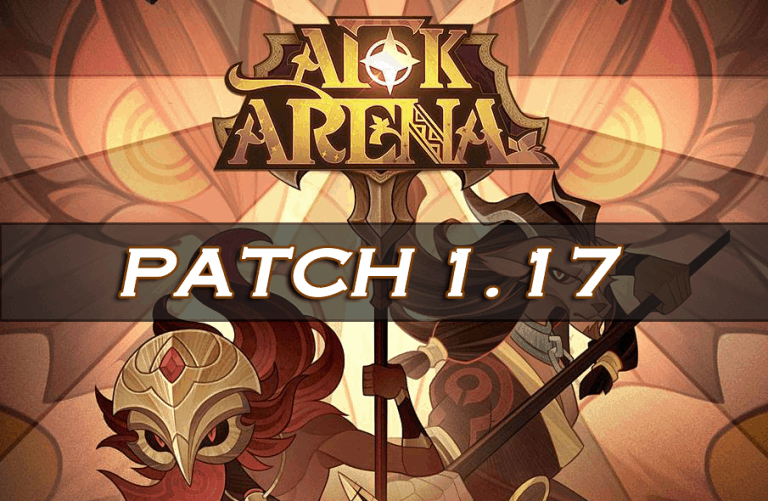 Update 1.17 was a major patch for AFK Arena.

Added the new hero ‘Wishlist’ feature that allows players to add their desired heroes to the wishlist, increasing the chances of those heroes being summoned from regular and factional hero sets (Does not affect the odds of Legendary heroes).

The wording is a bit confusing, but it seems like you can place one hero in the wishlist and it will work, but the increased chance won’t multiply because there’s less heroes in the wishlist.

Added two new adventures to the Peaks of Time:

You’ll earn “Medals of Valor” from completing daily and weekly quests. Collected a certain amount of medals will unlock a new tier of rewards. The basic rewards are Rare Hero Soulstones.

However, you can also purchase a “Premium Pass” that will unlock additional rewards per tier. These rewards are Elite Hero Soulstones & Diamonds.

Added the new ‘Battle Wager’ feature to the Legends’ Championship tournament that allows players to double their gold by betting gold on the players they think will win.

Added the ‘Quick Battle’ feature to guild hunts which can be unlocked after reaching VIP level 6.

(You can’t do this for the first battle for some reason).

(If you can’t see the new chat, you’ll have to update the game via the app store).

Changed how relics are displayed when receiving them in the Arcane Labyrinth and Peaks of Time.

Easter Eggs are no longer in use and have been recalled. Players will be sent 50,000 gold coins via their inbox for every egg that was in their possession.

What was formerly called ‘Ladders’ can now be found under the ‘Ranhorn’ tab at the new structure called the ‘Wall of Legends’.

Optimized the way gear is equipped by heroes. Heroes can now directly swap gear with one another.

Optimized how ‘Hour Glass’ item resources are displayed, allowing players to see the exact amount of resources that will be received.

Optimized the performance of several of the game’s interfaces.

Optimized the visual animations for the hero Seirus and several NPC monsters.

The damage coefficient for Khasos’ level 2′ Throwing Axe’ ability has been increased from 110 % up to 115%.

Adjusted the way damage is calculated for the relic ‘Poisonous Embrace’, damage over time is now determined by the attacker’s own attack rating.

Fixed an issue affecting hero unions that was causing incorrect enemy attack ratings to be displayed.

Fixed an issue that was causing some heroes above level 240 to cause overly excessive damage to lower level enemies in the campaign and King’s Tower.

Fixed a bug that was causing hero portraits to display that their ultimate abilities were ready to be activated, but would not activate when the player attempted to.

Fixed a bug affecting Thoran’s third skill ‘ Resurrection’ that would sometimes prevent Thoran from being resurrected after he died.

Fixed an issue that was preventing Numisu’s ‘Offensive Totem’ from correctly being cast behind his enemies.