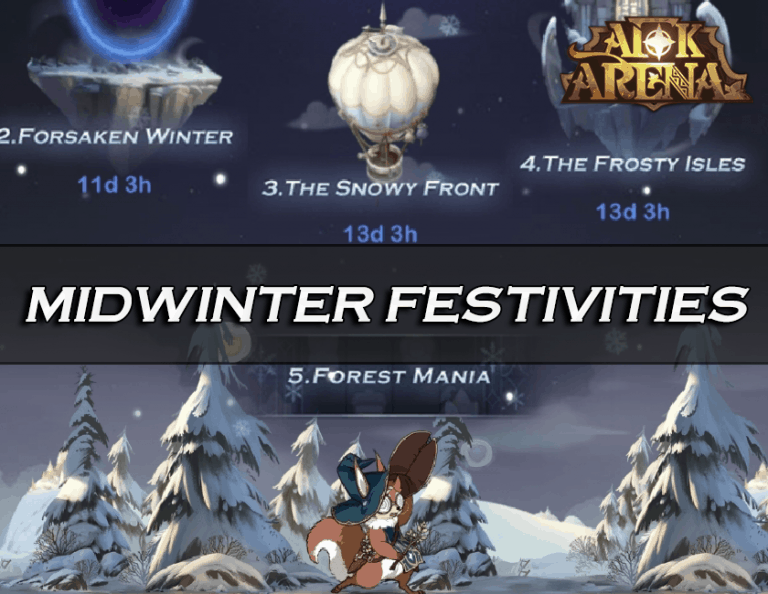 The Midwinter Festivities are back and updated for 2020!

This time players will battle Shemira, Niru & Daimon and can earn skins for all 3 heroes.

There’s also a new winter themed Voyage to explore and a match 3 game to play in the new Wondrous Pouch feature.

A hero choice chest from the new Voyage “The Snowy Front”.

Aside from the above, there’s also a lot of random currency and faction emblems.

What you can obtain with this amount is somewhat reliant on RNG.

This is a mini-boss fight featuring a special Ice version of Shemira, Niru & Daimon.

When the northern winds batter at the door and frost rims the windows, Shemira becomes reflective. She recalls that winter which now seems like forever ago. Her son, only two years of age and barely able to stand on his own two feet, bundled tightly against the cold seeping into their home and looking out at the driving snow with wonder. She remembers the way his breath, so warm, fogged the panes of glass.

This was contentment. She remembers the messenger at the door. The skirmishes were happening with more frequency. They needed more men. More healers and medics, he explained. They needed her husband.

Niru left the next morning and though she had been assured that he wouldn’t be at the front lines, she had a nagging feeling that scratched at the back of her mind. She felt as if something was going wrong. As it happened, she was right.

The fighting continued unabated. What she had expected to be one difficult season turned into several. Eventually even the longing she felt became a dull kind of pain after the seasons turned to years. She received news with some regularity, him ever optimistic, but now the letters were more a curiosity than the lifeline they had once been. She read over them distantly, barely internalizing the words on the page. After all, if he wasn’t there then what good was this? It was like talking to the dead.

All the while, their son grew. Shemira did the best she could on her own but the burden was heavy. She had good work as a tailor, fashioning dresses for noblewomen and wives of the wealthier merchants. She would spend long hours over the fabric, working her needle with a careful hand. Sometimes she would think briefly of Niru and wonder if he too was holding a needle, sewing up some wound rather than fine cloth, somewhere far away from his true duty here at home. Each year when winter came she would watch out the window as Daimon, getting bigger all the time, would play in the snow. She wasn’t unhappy, not truly, but something was certainly missing.

Her joy was short lived. The man who had left their threshold that day years ago was not the same as the man who’d come back. He was gaunt, disheveled, with a feverish glint in his eye. Getting settled back into their old home, he spoke at a frantic pace of the things he’d seen. He went on and on about the graveborn they’d been fighting, saying he’d learned more from them than from all his previous studies.

“They don’t tire! They require no food or rest. They feel no pain!”

She knew now that he had been right about most of his claims, but there was one that he had misunderstood. Years more had passed since his return. Years more than that had gone by since she had herself undergone the transformation. It was true that she never felt hunger. It was true that the icy winds swirling around her caused her no discomfort. It was not true that she felt no pain. She was consumed by it. Every memory of her old life was overshadowed by the memory of Niru’s trial and execution and the subsequent death of their son.

She stood alone in the cemetery with only her wretched memories to accompany her. Cold tears froze on her face. She screamed her anguish into the howling wind, and the spirits of winter heard her call. The flurries of snow became ever more animated, circling around her in a vortex. She imagined that once or twice she saw faces in the whirling white. When the winds finally subsided, she was donning gossamer sheets of frost. She was the image of death. A perfect picture of endings.

This is the reward event. It’s basically the exact same as ‘The Celestial Isles Event‘

The two new skins for Shemira & Daimon can be obtained as an ultimate reward.

Players are required to choose an ultimate reward on each new floor before they can begin opening slots.

Once an island’s ultimate reward has been discovered, players can advance to the next floor. However, if players choose to advance, the remaining slots on the current floor will disappear.

During the Frosty Isles event, players are able to unlock one ultimate reward every 10 floors.

Remaining Glacial Keys will be recalled for 5k gold per key once the event has concluded.

Each level has 36 squares to unlock.

It’s completely random, there is no strategy to it.

The new skin for Niru can be obtained from here.

This is permanent, so not necessarily an event as such but it’s part of the Midwinter Festivities. That means you should have an unlimited amount of time to obtain the skin even after the event has ended.

These rewards are for earning a certain amount of stars from levels.

These are the rewards for completing each stage.

Stages will become unlocked based on the player’s Campaign progress.

Players can claim one-time rewards every time they complete a stage for the first time.

Players can attempt to surpass their current high scores by replaying stages. Stage scores will contribute to the player’s ranking on the ‘Friends’ and ‘Server’ leaderboards.

Help! Pippa has once again got herself into a sticky situation!

The Astral Academy tasked Pippa with the important task of delivering their magical seeds to an area of the forest which being lost to the desert. With such a vast amount of land to cover, a normal bag would be nowhere big enough to hold the sheer amount of seeds required to reclaim the forest. Thus, Pippa made use of a dimensional pouch, given to her by her teachers. Pippa, being as clumsy as she is, accidentally tore a hole in the bag, causing all of the seeds to pour on the forest floor. With only one drop of water needed to grow a whole tree, one must hastily gather up the seeds, or face disaster!

Thankfully, the first snowfall of the year has covered the forest with a thick blanket of snow, helping to slow the seeds’ growth. All one needs to do is smash the blocks of ice, and the seed shall be returned to Pippa’s magical pouch.

The only problem is, Pippa still hasn’t noticed the big hole in her pouch!

“Ahh! Why do all these seeds keep appearing?!”.