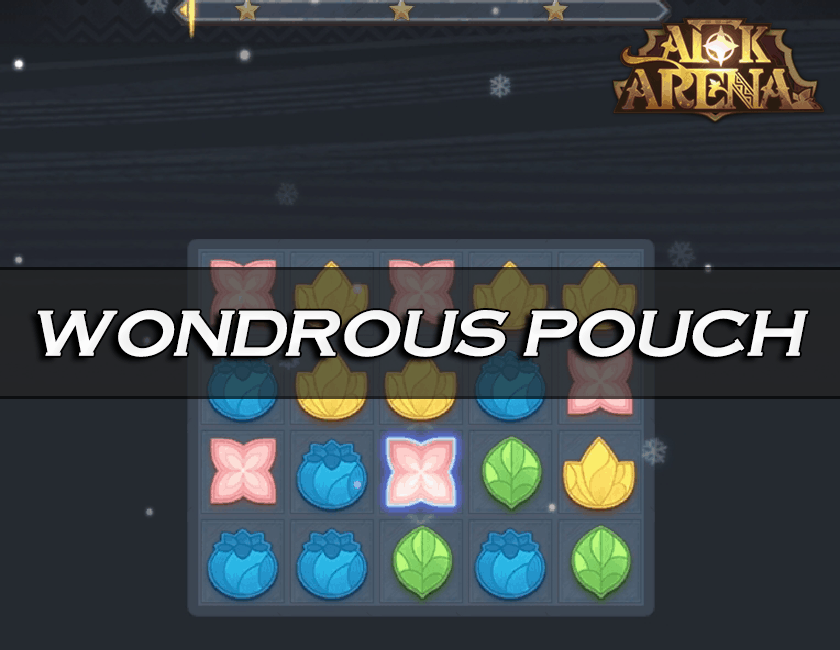 The Wondrous Pouch is a new casual feature for AFK Arena.

It can be found within in the Peaks of Time and is unlocked by completing Stage 2-3.

It will likely feature mini-games that anyone can play without needing too much investment into the main game.

Unlike the other Peaks of Time adventures, these ones do not need to be opened or closed. They’re always available.

This is the first adventure for the Wondrous Pouch. It’s a match 3 game, basically like Candy Crush or other popular games in that genre.

A new skin for the graveborn hero Niru can be obtained from here as a reward for earning 30 stars.

There are 30 stages to complete, and 90 stars in total to collect.

Each stage has a global and server leaderboard for scores.

These rewards are for earning a certain amount of stars from levels.

These are the rewards for completing each stage.

Stages will become unlocked based on the player’s Campaign progress.

Players can claim one-time rewards every time they complete a stage for the first time.

Players can attempt to surpass their current high scores by replaying stages. Stage scores will contribute to the player’s ranking on the ‘Friends’ and ‘Server’ leaderboards.

Help! Pippa has once again got herself into a sticky situation!

The Astral Academy tasked Pippa with the important task of delivering their magical seeds to an area of the forest which being lost to the desert. With such a vast amount of land to cover, a normal bag would be nowhere big enough to hold the sheer amount of seeds required to reclaim the forest. Thus, Pippa made use of a dimensional pouch, given to her by her teachers. Pippa, being as clumsy as she is, accidentally tore a hole in the bag, causing all of the seeds to pour on the forest floor. With only one drop of water needed to grow a whole tree, one must hastily gather up the seeds, or face disaster!

Thankfully, the first snowfall of the year has covered the forest with a thick blanket of snow, helping to slow the seeds’ growth. All one needs to do is smash the blocks of ice, and the seed shall be returned to Pippa’s magical pouch.

The only problem is, Pippa still hasn’t noticed the big hole in her pouch!

“Ahh! Why do all these seeds keep appearing?!”.