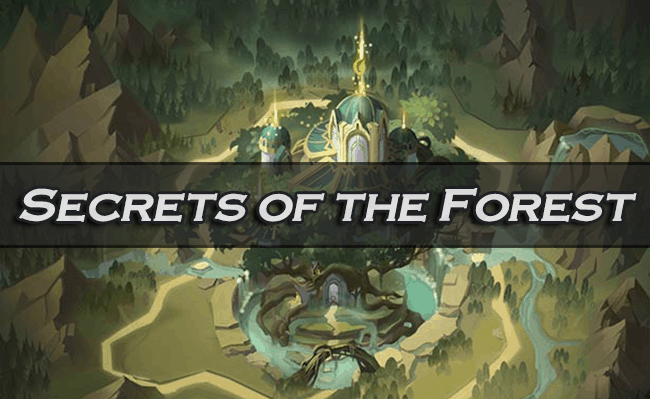 Secrets of the Forest Guide

This is the third adventure in the Peaks of Time. It’s also the second that rewards an artifact.

Every time you defeat an enemy in this adventure a vine will grow in a set place that will block your path.

This isn’t really much of an issue for the first 3 treasure chests, but for the last one you will only be able to defeat a certain amount of enemies before it is permanently blocked off and you’ll have to restart.

It’s impossible to get the last treasure by defeating all of the enemies that are in the way.

So how do we get around this? You need to be “Blessed” by the forest, which will open up a hidden path to the artifact.

You can receive the blessing by completing the “Trial of the Forest”, which is an enemy team that you must defeat.

Sounds easy, eh? But there’s a catch; you have to win the fight with only Wilders heroes.

For some reason, battling the five enemies below will permanently stop anymore vines from growing on the map. Once you’ve defeated the 5th enemy, you can just make your way to the chest easily.

However, some treasure chests are locked behind bushes, so you’ll need to defeat the wilders team to remove them if you want to 100% the adventure.

Interact with the encampment.

It turns into this:

Pass the trial by defeating the enemy with a Wilders team:

Tip: You only need to win the battle with a full Wilders team. If you don’t have a strong enough team of Wilders, then you can use another team to kill a few enemies off and then do the battle again with your Wilders heroes. As shown below:

Once defeated, a hidden path will open up.

You simply need to follow the path to the treasure, but there’s one more Elite enemy to defeat:

Then head through the openings in the bushes:

You’ve made it! Phew. That was a lot of hassle.

Time to claim your prize!