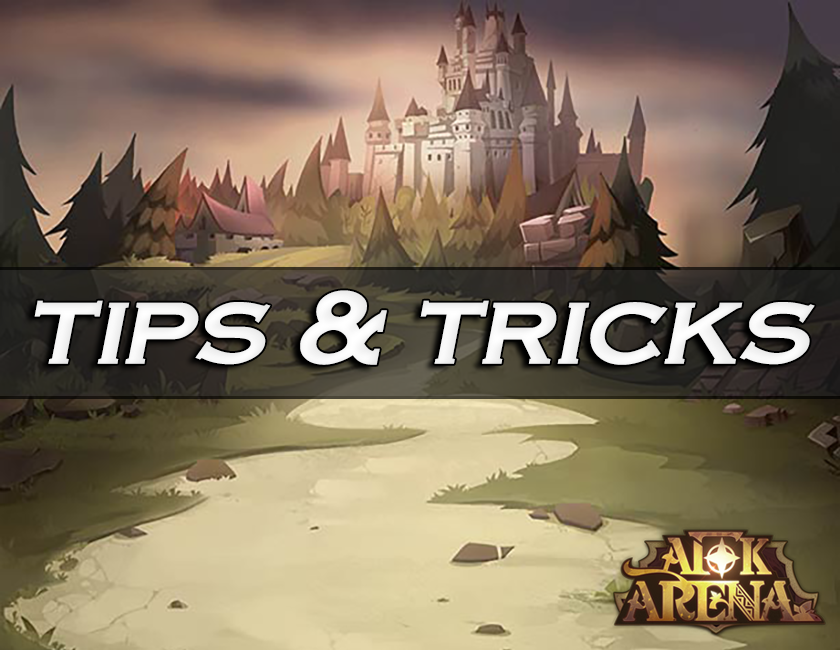 These are some quick and easy tips that can be really useful when you’re just starting out in the game.

To link an account, tap on your player avatar and press the “Account” button on the main page, then press “Link”.

(One important thing to note about guilds is the fact that you can join a guild from ANY server, not just your own).

Joining a guild gives you access to guild bosses which reward currency that can then be spent on gear at the guild store. It’s basically free gear with no downside.

It can even stock legendary & mythic items if you have high enough campaign progress. The gear can also have a faction bonus, but it’s semi-rare and random

Not only will you get free heroes from it via the companion points, but you can also use their heroes for team bounty missions and union buffs in the library.

Don’t be afraid to remove inactive people because you will be missing out if the people on the list aren’t active.

AFK Rewards can only accumulate for a maximum of 12 hours. After that time period you won’t earn anymore rewards at all. Make sure to collect them regularly or you’ll slow down your progress quite significantly.

Stuck on a Level? Keep Trying!

Every single attempt at a level is different due to the AI and the random nature of stats such as crit and dodge. Some of them can just take a bit of luck to complete.

Unless your team is severely underpowered, there’s always a chance that you can just randomly get past a level by continually attempting it.

Enhancing a heroes gear early on is quite cheap, and it will boost your team’s stats. Boots are the best thing to upgrade. You can enhance it by clicking on a piece of gear on the heroes profile page. There will be a blue “Enhance” button there.

Don’t use Ascended Heroes as Fodder

Ascended heroes are generally more useful and much harder to obtain. Never use them as fodder. See our Fodder Guide for more info.

If you know you’re going to lose a battle in the Arcane Labyrinth, you can exit the battle before your heroes die and they will not be lost.

Do all Daily & Weekly Quests

It might go without saying, but this is an important thing to do. Not just for yourself, but also for your guild.

This is another “obvious” thing to do, but it is worth mentioning. The rewards are a nice bonus, especially for diamonds.

The bounty board can also be upgraded, but you need to complete a certain amount quests to unlock each level. This is basically time-gated, so it’s important that you do it every day because there is currently no other way to add more bounty quests per day to catch up if you miss out.

Buy “Hero’s Essence” for Gold from the Store Every Day

You might not need it now, but eventually hero’s essence will become a large barrier to progress as you need A LOT of it to level up all of your heroes past certain thresholds.

However, this may not be possible for everyone, as it does cost quite a bit of gold to purchase from the store. If you’re low on gold, then you might want to skip this.

Heroes are much more valuable and harder to obtain.

IF you do want to buy gear, there is a vendor that shows up in the arcane labyrinth that has gear available to buy at a 40% discount. This can include legendary and mythic gear if you have high enough campaign progress.

These heroes are extremely weak and basically useless. Retiring them will reward you with hero’s essence, which is used to level up heroes past certain points and is very important for progression.

If you don’t have a lot of heroes yet, then you can also use commons for bounties instead.

Complete 100% of Each Peaks of Time Adventure

Five powerful artifacts that can be found inside treasure chests found within the Peaks of Time mini-adventures. These are unique items that cannot be obtained from anywhere else. If you don’t have them, you’re missing out.

You can’t just go and complete every adventure instantly though. Each one has campaign progress requirements and a certain amount of chests must be obtained from the previous adventure.

Lots of other rewards are available from the treasure chests, so make sure to do 100% of each adventure as soon as you unlock them.

When you retire heroes, you’ll be compensated with Hero Coins which can be spent at the Barracks store. It’s best to save up enough of these to buy the Epic Soulstones first. The Rare Soulstones are too random and your chances of obtaining enough of the same hero to make one epic is not really worth it.

Use a Team That has At least One of Each Class

There’s 3 different “classes” in AFK Arena, although they aren’t really listed as classes.

They are: Strength, Agility and Intelligence.

Heroes of each class can only wear gear made for that class. So Brutus for example can only use Plate Armor and Heavy Weapons, where as Vurk can use Leather Armor and Light Weapons.

There isn’t a varied selection of gear with different stats either, all heroes of the same class will use the exact same gear if the rarity is the same.

It might be tempting to instantly use Fast Rewards when you first login, but it’s better to wait until you’ve done everything else and tried the stage again for the chance of passing it and increasing the gains from Fast Rewards.

This isn’t going to make a huge difference, but it’s good if you want to min-max your EXP/Gold/Essence gain.

Save Your Hourglasses until You’re Hard Stuck at a Stage

Same principle as the Fast Rewards. Hourglasses scale with your campaign progress. You want to save them until you’re hard stuck at a stage, so that you maximize your gains.

You can Manually use a Hero’s “Ultimate” Skill

During a battle, hero’s “ultimate” skills can be manually activated. This can be useful to utilize, as timing can be very important. The other skills are passive and handled by the AI.

Heroes of the Same Faction Receive a Buff When Paired Together

The minimum requirement for the faction bonus is 3 heroes of the same faction. See below for more details:

Factions are Stronger & Weaker Against Other Specific Factions

It’s basically Rock, Paper, Scissors. Keep note of the enemies team faction, because it could be important knowledge to beat them. See below for more details:

They’re all automatically collected at the end of the battle. You won’t miss out on anything.

It’s fairly rare, but once you complete Chapter 16 – Stage 12, Mythic gear can start dropping from AFK Rewards. This is a good source of gear for basically doing nothing.