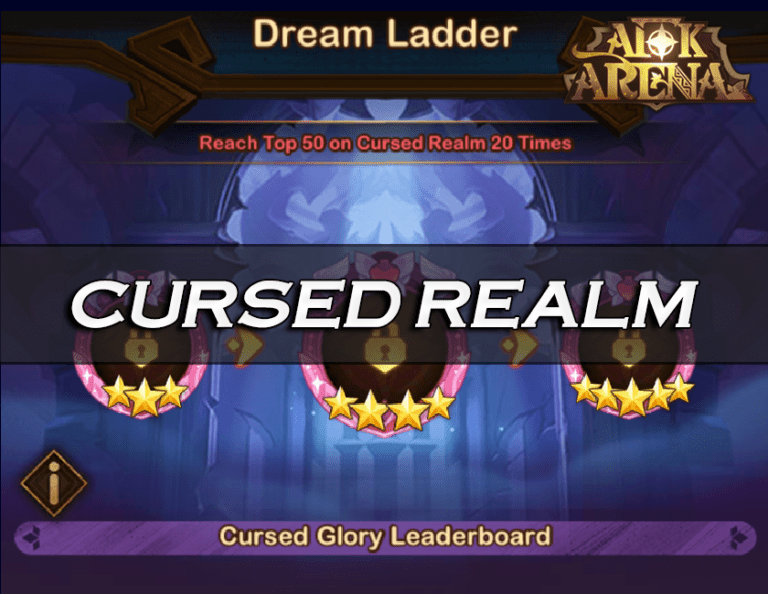 Welcome to our AFK Arena Cursed Realm guide! This is a new game mode that will be released with AFK Arena Patch 1.75. It’s pretty much the same as the Twisted Realm, except there are permanent rewards for the leaderboard and it is heavily focused on the competitive element.

You’ll need to be in a guild to enter the cursed realm, as it can only be accessed in the guild grounds. There’s now a new icon with the name “Hellscape” that’s replaced the old twisted realm one.

The requirements for it are quite hefty though as you’ll need 6 teams, 5 for the mini-bosses, and 1 for the last boss. You’ll need a very large roster of heroes to compete in this.

All of the bosses in Cursed Realm are from Twisted Realms.

The Cursed Realm opens once every 7 days.

All heroes within the Cursed Realm have a level of 360, their gear and tiers will remain unaffected. Heroes will not receive any Artifact or Union attribute and effect bonuses.

Players may only use mercenaries, dimensional heroes and heroes who are within the Resonating Crystal.

Only one mercenary may be used per formation within the Cursed Realm, however, the number of times that a mercenary can be used is unlimited.

Bosses and their Shadow Guards will stack attributes and grow stronger every time a certain amount of their health is lost.

Within each new Cursed Realm session, players are able to challenge bosses 10 times for free, after which the expenditure of diamonds will be required in order to continue challenging bosses. Players may challenge bosses a maximum of 199 times per session. One battle challenge attempt will be deducted each time a player enters a battle.

The final damage of each challenge is total sum of the damage dealt to bosses as well as the five Shadow Guard teams.

Only the highest recorded damage dealt throughout all boss challenges will count towards your final ranking. Your final ranking will be determined at the end of each session.

Rewards for every Cursed Realm shall be gradually sent to players’ inboxes at the end of each event.

Individual Cursed Realm Leaderboard rewards will be gradually sent out via email once the season’s rankings have been calculated.

Get the special avatar frames by getting to the top on the Cursed Realm Leaderboard!

The Cursed Glory Leaderboard shows the Dream Ladder achievements of players across all servers.

Rankings are predominantly based upon the time that players acquire avatar frames. If players are equally ranked in terms of frame quantities, the player with the highest overall Combat Rating will claim the higher ranking.

The lives of mortals are wrought with suffering and hardship, as they find themselves in a perpetual war with their own desires.

Ezizh Hellborn knows this fact very well, and the “Cursed Realm” is the prison he has built to cage them in.

Ezizh allowed for these feeble human minds to run amok in this killing field. Some humans seek out the fantasies that satisfy their deepest desires within this dreamworld, while others drive themselves crazy by instead stumbling into never-ending nightmares.

Those who are left trapped within the nightmare find themselves merging into the nightmare, becoming a part of it. They are the victims of this curse, and also its executors.