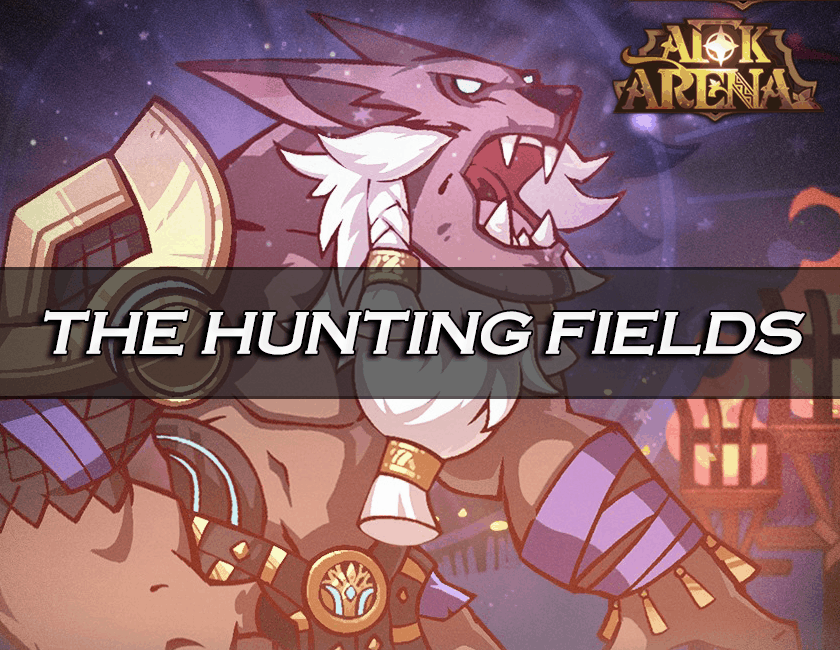 The Hunting Fields is a new group event. It’s sort of like a mini Abyssal Expedition for 5 players.

You can either enroll solo as a “Lone Wolf” or with 4 friends / guild members via invitations.

Lone Wolf will match you up with 4 other players that also selected that mode and haven’t chosen the same faction as you.

Each squad will have one “Captain” and 4 “Members”.

There’s also an option for up to 10 players to be a “Supporter” role in a squad. Supports basically just watch over the event and receive slightly less rewards.

Try to form a group via invitations, as using “Lone Wolf” runs the risk of playing with people that may quit.

When the event begins, capture as many camps as possible to hold.

When fighting camps, try not to waste stamina by dying. You can play on a slower speed and retreat if things are going badly.

Don’t waste Challenge Seals at the start. Always give them to the carry, aka the player with Celestial/Hypogean/Dimensionals. Graveborn players could also be chosen as they’re good for bosses as well.

Put all the relics you acquire into the Shared Bag.

Synthesize your relics once you have enough materials. This will save using Hunter Coins on them.

Don’t bother pathing to Khazard quickly. Increase your squad rank first and then sweep to him later on. This will save stamina.

Players can only choose one faction to play in their 5-person squad. No one else can use the faction you pick.

This choice cannot be changed once picked, so make sure to cooperate with your fellow squad members on which one is best to choose for the team.

Once a faction is chosen, you can then choose 10 heroes from it to use.

Which Faction to Choose?

This will largely depend on your own heroes.

CHaD is generally reserved for whales and is the main carry for camps and mini-bosses.

For Graveborn it is recommended to have:

Heroes used in The Hunting Fields will use the “Martial Rating” system. This means everything is scaled to your Resonating Crystal level.

This event will use the same stamina system as the Abyssal Expedition. However, the stamina gained per hour is now only 3.

Hunter Marks can be collected from occupied camps on the map. They accumulate over time.

Runes are special items for heroes that increase their power. They’re basically like the relics in the Abyssal Expedition, except they can be physically equipped by individual heroes, just like real gear.

You can place any runes you don’t need in a “Shared Bag”, which other squad members can access.

There are various missions that be completed during the event.

Once all missions in a specific tier have been completed, your squad level will increase.

Higher squad levels will allow you to use more heroes, occupy more camps and equip better runes and more seals.

Squad levels are also directly connected to the rewards of the event, with the highest granting the most rewards.

There are several bosses on the map that must be defeated for missions.

They drop random Runes, which will be equally distributed once the boss is defeated.

The final boss is called Adrax.

Final rewards are based on your highest squad level. Members will recieve more rewards than Supporters.

You will play as five-person hunting squads in co-op instances, each instance lasting 7 days, with the last day as Quiet Time.

During the event, you can enter The Hunting Fields as a hunting squad member or a support role. Support roles will not participate in battles.

Members of the hunting squad can participate in the battle through individual registration or squad registration. When you’ve reached the required number of people, the instance will start.

Instances make use of the “Martial Rating” system, and every hero’s base level is set to 240. A hero’s level may be increased by a number that is based upon their own level.

There are 5 factions in the instance. Solo matching will give you a selection of multiple desired factions, but each member of the hunting squad can only enter the instance with Heroes of the faction that got matched up in the end, and cannot use Heroes of other factions.

Members of the hunting squad can exchange items and share resources through the shared bags; this can improve the squad’s strength. Please place all items that you don’t need in the shared bags for your companions to use, and enhance your overall combat effectiveness.