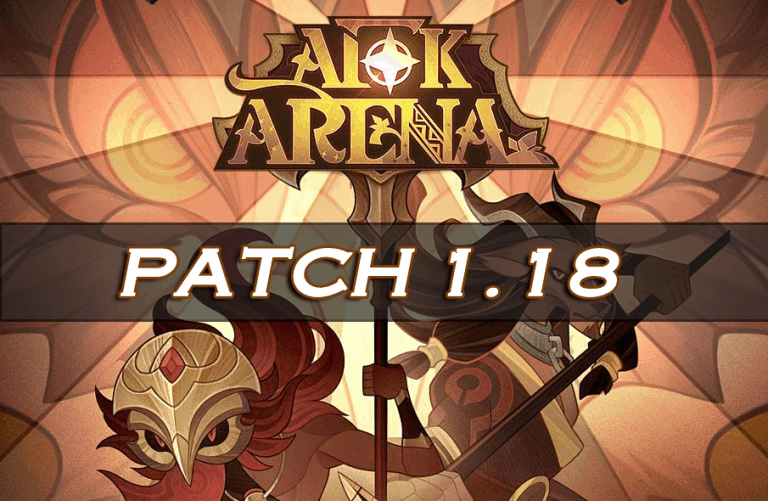 Update 1.18 was a major patch for AFK Arena.

Note: Mythic+ gear has been removed from the latest patch notes.

Added 4 new faction-based towers within the King’s Tower than can be unlocked after completing Chapter 15-1.

Added a new difficulty option for the Arcane Labyrinth. After completing chapter 9-4 and completing the second floor of the labyrinth, players will have the choice to play the third floor in normal mode or hard mode.

Hard mode will offer the players harder opponents to fight against as well as better loot and new structures to discover.

Added a new adventure to the Peaks of Time: The Burning Woods.

Added the new ‘Road to Glory’ feature to the Legends’ Championship which can be opened after making it to the Round of 64.

(It seems like the Legend’s Championship will now also be split into regions).

Added a button that allows players to automatically field their formations with just one push of a button to the Guild Wars, Legends’ Challenger Tournament and Legends’ Championship Tournament pages.

Added a ‘Try Again‘ option to the pause battle page that allows players to restart a battle as they please.

Added an option that allows players to directly advance to the next stage of the campaign after having completed a stage.

Added an extra mercenary slot to the ‘My Mercenaries’ list located in the Library.

Due to a large number of competitors participating in the Legends’ Championship tournament, we have decided to split competition into two separate regions. This change will take effect in next tournament.

Added maximum quantity limits for Labyrinth Tokens and Guild Coins. Any surplus coins earned that exceed these limits will be automatically sent to the player’s inbox.

Added Skreg and Seirus to the Labyrinth Store.

Maximum amount of Guild Deputies per guild has been raised to 3 deputies.

It is now possible to search for other guild’s information within the ‘Guild’ house.

Optimized the visuals of the Champions’ Hall page.

Grezhul’s ‘Demonic Assault’ ability now steals 30% of his opponent’s defense rating instead of the previous 15%.

Reduced the AoE effect for the ability ‘Throwing Axe’ so that it matches the attack animation more accurately. If Khasos is positioned in the center of the backline, the ability will no longer hurt all enemies on the battlefield.

“Deep Roots” now immediately restores a certain percentage of Ulmus’ health when used. Ulmus now also moves to the frontline when using this ability as opposed to staying in the backline.

Adjusted level 2 “Life Torrent” ability effects. The ability now affects Ulmus and his weakest ally as opposed to nearby allies which were previously affected.

The percentage for how much Ulmus’ “Life Torrent” ability restores lost health has been increased from the previous 3%/3%/4% up to 4%/4%/5% per each respective ability level.

The totem summoned when using the ‘Offensive Totem’ ability will no longer be positioned according to which way the enemy is facing. The totem will now always be positioned at the location that is farthest away from Numisu, regardless of where he is on the battlefield.

The level 2 ‘Banishment’ ability description now displays the duration of which Tasi steals her enemy’s attack rating for.

The ‘Inspire’ ability now displays the duration of which attack ratings are increased for.