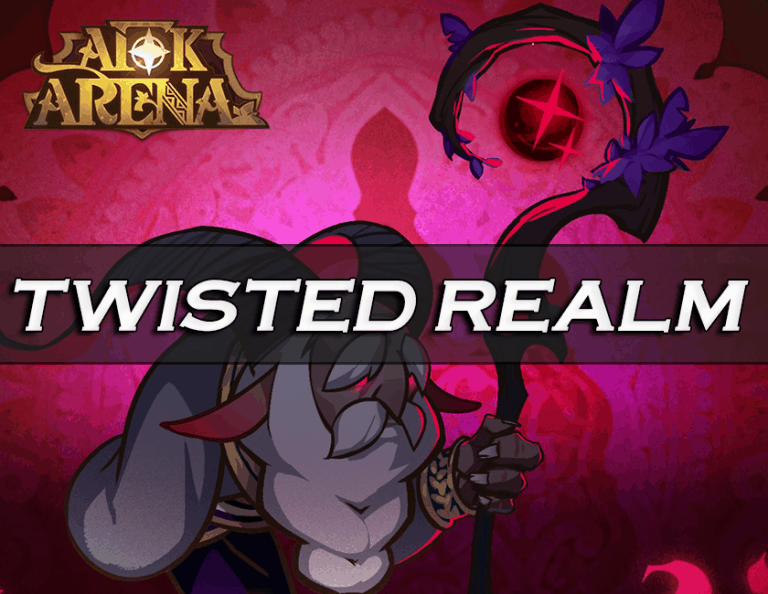 The twisted realm is a new world boss feature located in the guild halls. It can be unlocked after completing Stage 12-40.

It is on the same reset timer as the Arcane Labyrinth (48 hours).

The highest score that a player achieves on the current boss will be shown on a global leaderboard. There are different leaderboards for players at different power levels. Under level 240, it’s based on the average power of their top 5 heroes. Beyond 240 it’s based purely on their Resonating Crystal level.

Once the boss timer has expired, everyone will receive Twisted Essence & Poe coins in the mail based on their final placement. Twisted Essence is used to level up virtues in The Elder Tree, Poe Coins are used to buy furniture.

Diamonds can also be earned for everyone in their guild if they reach ‘Legend’ rank.

The bosses always rotate in the same order.

This is the same boss from the Phantom of Horror’s Eve Event.

Nemora cannot be attacked, instead she will summon waves of 5 Dreafs. The general strategy is to use Shemira with support heroes to buff her energy and damage. These include the typical lineup of Rosaline, Rowan, Elijah & Lailah.

Another really good hero for this is Estrilda as her signature item is very strong for it.

Estrilda’s signature item increases the attack and defense ratings of all allies when an enemy is slain, this stacks up to 3 times. The Dreafs of Demonic Entity count as an enemy hero so it is permanently up during the fight.

Kane will kill your highest damage dealer at 3 points during the fight. This makes Talene the ideal candidate to counter him. However, it requires that she is the highest DPS, which might not always be viable.

Another strategy is to bring 2 DPS and sacrifice one of them at 15 seconds. This can be done by playing in manual mode and only using the ultimate ability on the hero you want to sacrifice. Once it dies, auto mode can be resumed.

Heroes such as Rosaline, Elijah & Lailah, Rowan are always going to be useful in this fight as support. The best DPS outside of Talene could be either Shemira, Athalia, Mehira, Baden, Isabella, Kaz, Safiya or Thane. Keep in mind that some of them may require upgraded signature items to really shine.

The Twisted Realm may be opened 2 times per day.

The Twisted Realm floor placements are determined by the average level of all heroes currently standing upon the Pentagram within the Resonating Crystal or the Pentagram’s own level after the player has surpassed a Pentagram level of 240.

Heroes within the Twisted Realm will all be set to the same level, however, heroes’ gear and ascension levels will remain as they originally were.

Players may only mercenaries, dimensional heroes and heroes which are within the Resonating Crystal.

Bosses will stack attributes and grow stronger every time a certain amount of their health is lost.

Within each new Twisted Realm session, players are able to challenge bosses 5 times for free, after which the expenditure of diamonds will be required in order to continue challenging bosses. Players may challenge bosses a maximum of 99 times per session. One battle challenge attempt will be deducted each time a player enters a battle.

Only one mercenary may be used per formation within the Twisted Realm, however, the number of times that a mercenary can be used is unlimited.

Only the highest recorded damage dealt throughout all boss challenges will count towards your final ranking. Your final ranking will be determined at the end of each session.

At the end of each Twisted Realm session players will receive two (guild and individual rewards) e-mails that include their rewards.

Rewards displayed here are an indication of your final session rewards, which are determined by the highest amount of damage you have currently dealt, as well as your current ranking. The final amount of rewards you receive will be determined at the end of the session and may differ slightly from the above number.

Leaderboard rewards are determined by your ranking and floor number.

Guild mates within the Legend division whom participate in boss challenges will contribute Legend Points to their guild.

Guild members which have participated in boss challenges will receive guild rewards that are based upon the total amount of Legend Points contributed by all guild members.

Members that have not participated in a boss challenge will not receive any guild rewards.

The Twisted Realm belongs to a dimension that does not adhere to the conventional laws of space and time. The scientists of Esperia predicted that the world may not be as we see it and that in actual fact there are countless planes of existence, much like a floor that exist in-parallel.

The Twisted Realm now begins to grow and encroaches upon the physical plane also known as Esperia. The line between reality and this peculiar dream-like state becomes increasingly blurred with each passing day.

The Hypogeans are using this malevolent plane to project their hellish intentions onto the unblemished minds of the Esperian denizens. Sensing this malevolent encroachment, Tasi Dreamhopper has called upon Esperia’s greatest warriors halt this affliction that threatens the world’s very existence.