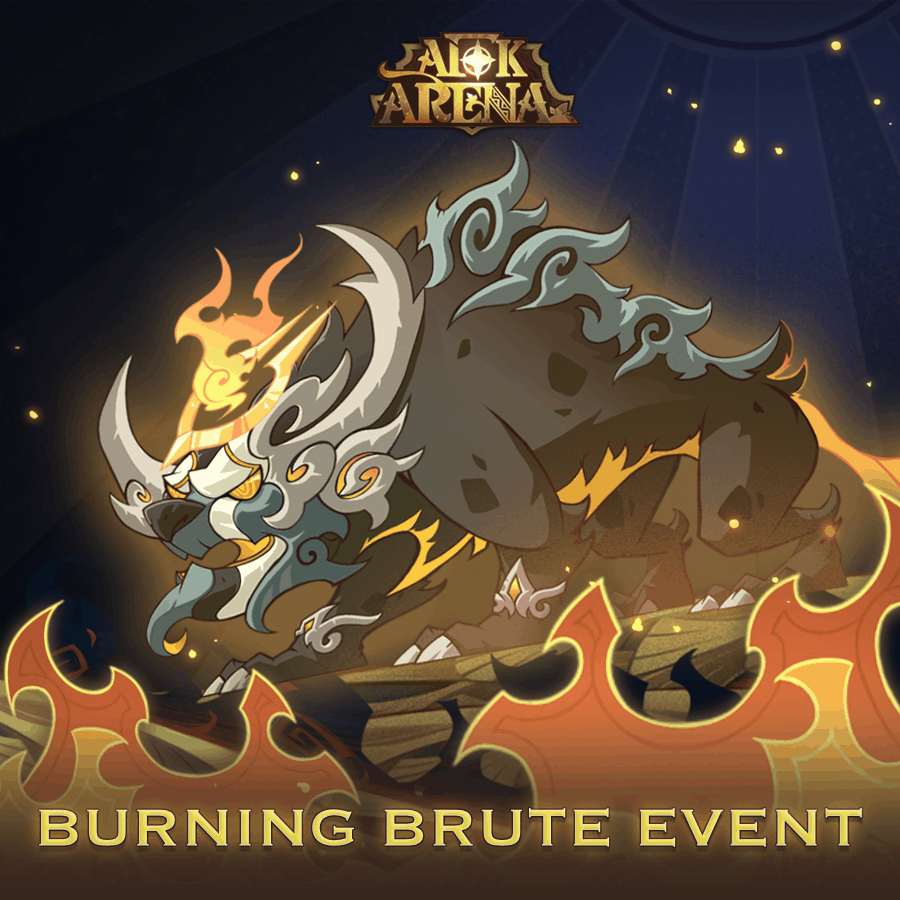 A new event has arrived in AFK Arena! It’s extremely similar to the previous Phantom of Horror’s Eve Event.

You can acquire currency by attacking a boss called the Burning Brute. It can be fought once per day. The more damage you can do to him, the more currency you’ll obtain.

The currency is called Astrobells and it can then be exchanged for rewards. The maximum amount you can obtain in one day is 100.

This is the boss of the event. He’s active for 12 days once it starts.

Here are some team comps that have obtained 100 bells from the Burning Brute. You’ll likely have different results depending on your own heroes ascension level, however this might give you a good idea on which heroes to use.

For teams featuring Rosaline, always put Dura’s Blade on the hero you want her to follow. Dura’s Eye is the best artifact to use on herself.

The Burning Brute, a creature not of this world. An unknown beast that appears to be neither wholly reptile nor mammal. It possesses a large head and thick skin. It is extremely fierce and should be approached with extreme caution.

When the space continuum was ripped apart, extra-dimensional creatures started appearing all over the land. It was first thought that most of these beings were great, noble warriors, but it has became apparent that they weren’t the only ones that came along for the ride.

The creature, with no real name other than its nickname “Burning Brute” or the “Nian Monster” in the Far East, most likely hails from a hellish landscape. It possesses a natural ability to breathe fire from its lungs. The creature is extremely violent and views all other creatures as enemies, not too unlike the Hypogean invaders.

It has terrorized countless villages and hamlets since its arrival in Esperia. The creature’s stocky stature and frighteningly sharp horns have left a trail of destruction all over the land.

The denizens of Esperia have made a concerted effort to slay the beast, but due to its powerful constitution it has proved very difficult to slay. The best that they Burning Brute can hope for is to temporarily drive the creature away.

Thankfully, for the majority of the time the beast remains in a long slumber and only awakes once a year to scavenge for food. The folk know that this time is coming and try to prepare as best they can for the inevitable destruction that will be wrought. Thus, the passing of each new year is now closely tied to this fiery beast. fiery beast.

Once the beast returns to its dormant state, the people of Esperia rejoice and celebrate by feasting upon the finest delights in the realm. However, the question always remains.

Will the Burning Brute return next year? Only time will tell.

Since it arrived through the broken space-continuum, the creature continues to wreak havoc in the nearby the ancient ruins of Esperia. Efforts to slay the creature were unsuccessful, but a weakness was discovered by a Wilder Zoologist: sound.

Armed with this knowledge, the astrobells were created by the best craftsmen in Esperia. The astrobells were distributed throughout the realm, ensuring that every village and town had one, giving the helpless townsfolk a chance of survival against the beast. Unfortunately, the creature is smarter than it looks. It laid waste to the craftsmen’s workshop and took with it the astrobells.

The craftsmen entrusted the Durri hunter, Vurk, with the task of tracking down the creature in order to find its lair. Once he had located its lair, the craftsmen set a bounty on the creature. Adventurers are able to reclaim the astrobells will be rewarded handsomely for their efforts.

Players may do battle with the Burning Brute once per day while the event is running.

Injuring the Burning Brute will cause it to drop event items called Astrobells.

Astrobells can be collected and exchanged for a variety of rewards.

The Burning Brute’s strength is determined by each player’s own combat rating.