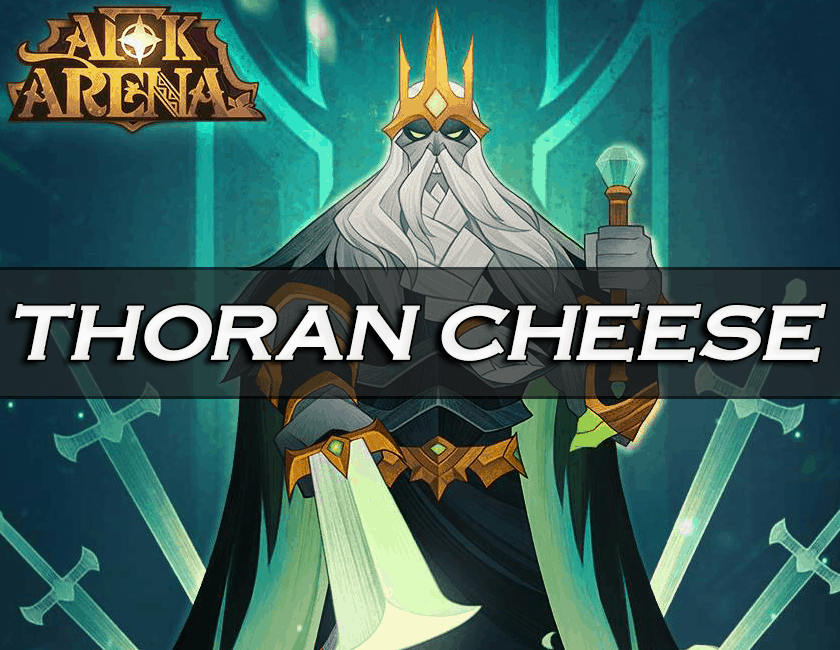 This is a guide on how to take advantage of the popular “Thoran Cheese” tactic in AFK Arena.

The strategy makes it possible to defeat stages that have a huge level deficit, and would otherwise be close to impossible without higher level/ascended heroes.

Generally maxing out Thoran as much as possible will help cut down RNG. This means having his signature at +30 and furniture 9/9. 3/9 will still work, but will likely mean a lot more attempts.

How Does it Work?

The main concept behind it stems from the synergy of his ultimate ability “Retaliation”and his signature item.

When Thoran uses Retaliation, he’ll start to channel a swing attack. Once complete, it will deal damage to all enemies in front of him.

However, while he’s channeling the attack, 200% of all damage he received during that time will be added to the his swing. If all enemies are attacking Thoran during his channel, he can potentially one-shot all of them once it completes.

What really solidifies this strategy is that his signature item makes him unkillable while channeling Retaliation. This makes the tactic very broken at higher stages, because the enemies will deal huge amounts of damage, but can’t kill Thoran.

Which Heroes to pair with him?

There’s 3 types of heroes that pair well with Thoran for this strategy — Energy generators, Displacers and heroes that can survive for a long time.

Pippa, Lorsan & Flora are generally the most used heroes to pair with Thoran at endgame.

These heroes will provide energy in some capacity for Thoran.

Pippa – Pippa’s +20 SI allows her to grant Thoran a 5 second immunity to all damage. This helps him generate energy.

These heroes will disrupt heroes and also potentially group them up for Thoran.

Lorsan – Links 2 enemies together, this can allow enemies that can’t be dragged to Thoran also take damage from his ultimate.

Eironn – Pulls up to 3 enemies towards him, this can bring them closer to Thoran.

Nara – Pulls an enemy towards her, which can bring it closer to Thoran.

Athalia – She can push a single enemy closer to the middle.

Skriath – Drags enemies into the middle.

Ezizh – Drags an enemy towards him.

Kelthur – Swaps places with an enemy.

These heroes are hard to kill and can finish off enemies if Thoran dies.

Flora – She can’t die before Thoran, and her ultimate can give him energy if the talent “Astral Tide” from the Elder’s Tree is unlocked.

Kelthur – When he dies, he can still attack enemies.

Talene – Can resurrect and heal.

The ascension levels of these heroes don’t really matter, as long as they have their abilities unlocked that aid Thoran.

Every stage is different. You’ll need to pick the right heroes for the job and position them optimally.

Generally Thoran is best placed on the frontline as usual.

Your other heroes should be setup to drag the enemies closer to Thoran. Example: Eirron is usually best placed in the middle, Nara is great at targeting mages that don’t move etc.

This will require RNG, so adapt and retry until everything lines up. It will likely take many attempts.

Certain heroes can cause trouble when utilizing this tactic. Having a +30 signature item can help with many of them.

These are the ones to watch out for:

Ezizh – He can cancel Thoran’s Retaliation while it is channeling.

Brutus – If his immunity shield isn’t popped before Retaliation is used then he will likely kill Thoran.

Thoran – The man himself. He can self-resurrect after the burst from Retaliation.

Kaz – She can dodge the attack, although it is unlikely.

Using the Dura’s Call artifact on Thoran can help him cast his ultimate faster.

Auto mode can be turned off so that Thoran’s ultimate is timed optimally.

Removing gear from Thoran can help him die faster, however it is something that has to be tweaked depending on the stage. In general, you want to remove gear that has has purely defensive stats and no accuracy. The boots are the most important piece to tweak, as they provide movement speed.