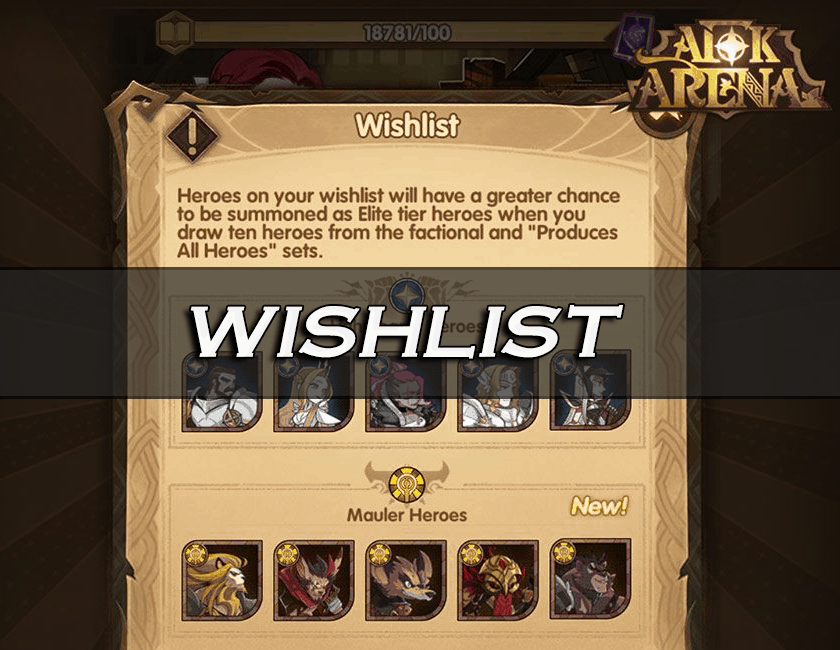 The Wishlist is a feature of the Noble Tavern that increases the pull rate of specific heroes when they’re placed on the list.

It’s unlocked quite early on, after completing stage 4-4 and is a core mechanic for collecting and upgrading heroes for progression.

Without such a feature, it would become increasingly harder to obtain specific heroes when more of them are released into the pool with each update.

Celestial & Hypogean heroes are excluded from being used with the wishlist.

When the wishlist is full, you’re guaranteed to get either a hero from that list, or a celestial / hypogean hero.

That’s why it’s important to fill your list up ASAP, even if it’s with heroes that you might not want right now. It’s still better to get some ascended hero, than a legendary one that’s only used for fodder.

Lightbearers have more fodder heroes than other factions, and this generally results in it being the first faction that a lot players focus on.

Rowan is one of the best heroes in the game, and should always be your first choice.

Heroes such as Belinda are quite appealing, as she’s a decent carry DPS early on and very simple to use. But keep in mind that she drops off quickly in the later game, and is a “large investment, low return” kind of hero.

If you do intend to use Belinda as your carry, swap Hendrik for her.

It’s a good idea to obtain one copy of Fawkes & Cecilia first in place of Estrilda and Hendrik (if you don’t have them already).

Rowan’s main niche is to provide energy recovery for his team. He can be used in almost any lineup and is great for all aspects of the game.

Similar to Rowan, except she provides energy for your strongest main carry hero. This allows them to cast more ultimates. The one downside is the power juggling game that has to be played in order to make her follow a specific hero. Overall she’s great for PvE and bosses.

A hero with many talents. Crowd Control, Buffing, and a little bit of burst damage. She’s currently the best hero to use against the Demonic Entity in TR due to her signature item and synergy with Shemira.

There isn’t really a huge amount of competition for the 5th wishlist spot, but Hendrik is an overall solid pick for tanking.

An optional choice, however Raine has recently become an extremely relevant hero in the boss damage meta (Mainly Twisted Realm). This is due to her new 3/9 Furniture skill increasing all of the damage that the boss receives by a whopping 30% until it dies.

One of the best factions in the game with the most consistent pool of good heroes from early to endgame.

The only thing they really lack is a strong carry in early game, but mythic gear can make up that difference somewhat when used on Eironn and Saurus.

Pippa could be replaced with Nemora.

Eironn is one of the best carry DPS in the game. A meta defining hero that’s essential for both PvE & PvP. He has Amazing synergy with other heroes and crazy CC with his pull, along with burst damage via tornados. Also benefits from dodge due to being an agility hero.

The queen of Crowd Control. Amazing for PvE & PvP. Useless for bosses though.

Lyca provides her team with haste. She can also tank on the frontline in many scenarios. Her signature item makes her the best support hero for agility heroes. Overall extremely strong for all elements of the game.

The king of bosses. Saurus has quickly risen to be one of the best heroes in the game. Especially good for bosses, but also very good for PvE as a carry & PvP for stall teams. One of his niche’s comes from an unlikely source — Healing. His +30 signature item can heal his team for a huge amount.

A sort of hybrid between Tasi & Nemora. Very RNG dependent, but that’s fine when you’re retrying stages over and over.

The maulers faction is a bit hit and miss. It used to have the strongest hero in the game, Brutus. However, the rest of the heroes at that time were quite lackluster.

Nowadays, there’s a decent pool of heroes to choose from and many play a role in strong meta teams.

With that said though, they’re not so prominent in the early stages of the game and stand as a more late game faction.

Safiya can buff allies and debuff enemies with her Spectral Disruption zone. This has a huge amount of synergy with heroes such as Eironn that can pull enemies into the zone and reduce the damage that they can do. On top of that, she has has extremely high burst damage from her ultimate, with the downside being it takes a while to charge up.

Skriath fits into the same synergy as Eironn & Safiya when he has his 3/9 furniture skill, which pulls the top and bottom enemy heroes into the center of the backline. Outside of that he’s still a very strong mage hero with his sandstorm debuff and ultimate. His +30 SI will make him do a lot more damage as well.

Skreg used to be a meme. Now his skill revamp and furniture skills have built an entire meta of “dive teams” around him. With 3/9 furniture, he buffs allies with 20% attack and receive 25% less damage when they are in the enemies half of the battlefield.

Tidus is a great carry hero for the maulers tower and becomes even stronger with this signature item at +20/+30. He can also fit into the 5-pull meta of Eironn, Safiya & Skriath.

Numisu is a solid support that can fit into many teams and is very good for the maulers tower.

Graveborn have quickly become one of the most popular factions in the game.

It’s a good idea to use your last wishlist spot to get one copy of Nara first (if you don’t have her), to use for pulling heroes on certain stages.

Daimon is an insanely strong hero when built has a main carry DPS. He replaces the role that heroes such as Shemira used to have, except he’s good from early to endgame.

Ferael is one of the best support carries in the game. He can drain the energy of enemies and reduce their damage output. Also capable of stunning/interrupting their casts. While he’s dropped off somewhat in PvP, he’s still a beast in PvE. He’s not so great for early game though.

Relatively new to AFK Arena, but has quickly become a top pick hero. Silas is the only graveborn support in the game and has a very strong kit of skills that’s capable of healing and buffing his team.

Thoran has an entire meta of cheese strats surrounding him. He can carry teams through extremely high level deficits due to his scaling ultimate and cheat death mechanic.

Izold is quite niche and requires 3/9 furniture to be really good. When you build him up though, he can be an insane carry with self healing and a constant attack power buff for himself. Overall just a very fun hero to play with.

An optional choice, Grezhul is one of the strongest heroes in the game for the Twisted Realm. If your goal is endgame, he’s essential for this game mode.