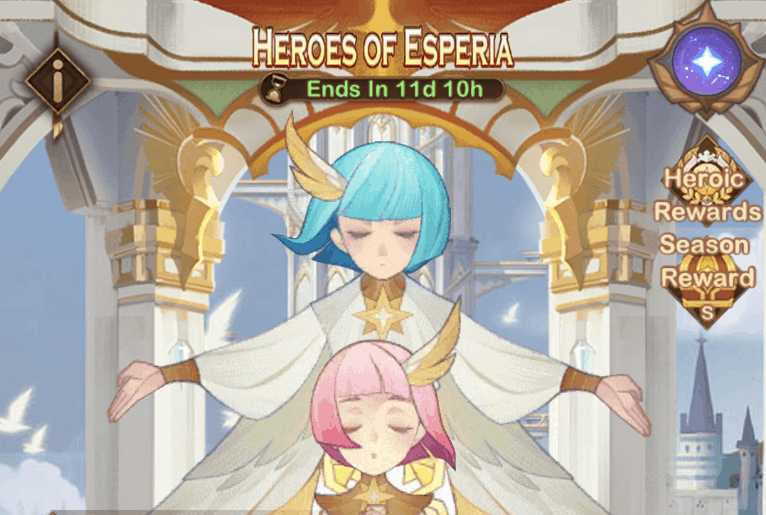 Heroes of Esperia is a large, limited PvP event in AFK Arena. It features players from every server, all battling it out to be number one.

Use your free tickets every day.

Try to target enemy teams that are:

Always try to pass to the next division if you’re close. This will make it harder for other players to push you out of the division.

Buy extra tickets everyday for 10 diamonds and save them up for the final push on the last day.

If you’re F2P/Dolphin, wait until the last few days to really push your rankings. Most players only start to rank in the last day or so, and before that, you’ll mainly end up fighting whales at high ranks.

Make sure to set your team formations as soon as possible.

The first team that gets 2 wins, is the winner, Therefore, always place your 2 strongest teams in 1 & 2.

Here are some team comp suggestions for ranking in the event.

One of the strongest meta teams in the game, for both PvE & PvP. The main combo is Ainz, Albedo & Arthur (Triple A). The extra 2 heroes are mainly there to support Ainz.

The old “whale* team, still pretty strong with many variants.

These are based on an age-old PvP meta team with Eironn & Zolrath, but it now has a few varients. Focuses on very high burst.

Mainly a PvE comp, but it helps to fill the gaps for PvP.

Players can raise their standings by winning trophies. A higher trophy count directly corresponds to a higher league standing and subsequently a higher quantity of rewards.

At the start of new seasons, players’ initial division placements will be determined by their current combat ratings.

Players will be required to field more team formations the higher their league standing rises. The player with the most victorious teams will win the matchup.

Players can press the ‘Formation’ button to arrange their defensive formations.

Each formation must contain at least one hero. Empty formations will be dealt an automatic loss.

If the battle timer has run out of time, the defending player will be victorious.

Every 1 Warrior class hero on the battlefield increases the Attack Rating of all heroes (including enemies) on the battlefield by 8% the first time their health falls below 50%. This effect can be stacked 5 times and lasts for 5 seconds.

Every 1 Tank class hero on the battlefield grants all heroes ( including enemies) a shield equal to 250% of their own Attack Ratings the first time their health falls below 50%. This shield can reach a maximum of 1250% of its own Attack Ratings and lasts for 5 seconds.

Every 1 Ranger class hero on the battlefield increases the Haste of all heroes (including enemies) by 10 points while their health is above 80%. This effect can reach a maximum of 50 points and last for the whole duration of the battle.

For every 1 Mage class hero on the battlefield, allied heroes (excluding the Ultimate ability caster) will receive 80 Energy points when an ally uses their Ultimate ability.

For every 1 Support class hero on the battlefield, each surviving ally will have their Health Regeneration increased by 15%, which can be increased up to a maximum of 75%. This effect will last for the whole duration of the battle.

This is the full list of leagues from lowest to highest. Each league has different divisions.

To those that flee comes neither power nor glory, yet even the bravest warriors are frightened by sudden terrors.

For eons, when a conflict would arise on Esperia, her people could expect massive losses of both life and property. Farms and villages burned, families and friends torn from one another. Widows and orphans were made in the thousands by the end of each new day. No matter the reason for the conflict, the results were always the same: Homes and hopes and dreams destroyed. It was the twins, Lailah and Elijah, who decided to put an end to this scale of destruction. Descending from above, they devised a new way for the mortals to settle their differences when words failed.

Rather than armies clashing on the field, leaving tribes and cities depopulated, a few elite fighters from each side will meet in the arena. For transparency, any of Esperia’s people are allowed to come and spectate, cheering on their own champions and watching as history unfolds and legends are made.

Items can be rewarded by reaching each different league

Normal rewards at the end of the season consist of Hero Soulstones & Honor Experience. You’ll be rewarded based on the highest league you managed to reach during that season.

Heroic rewards are special avatar frames that can be unlocked by obtaining League Points at the end of each season.