Talene called in lamentation, her tears sizzling over her beak and falling hot to the ground. Her mother’s lifeless form lay still beside her, still beautiful, black and red feathers moving softly with the breeze. The demons had come and though her mother had been able to push them back, they had been too many. Talene had never known such agony. She had never seen another of their kind. Her mother had told her that they were the only two left, a race on the extinction. All they had had was one another. This was isolation.

Even so, she would carry out the rituals as proscribed. When an Obsidian Finch died, their bodies didn’t simply return to the soil as with the other peoples of Esperia. The intense heat that smolde red within them went cold, true, but their forms remained unchanged. Only when given to Core’s Cradle, the ancestral home of their people, could the body of a Finch be returned to the land. Usually the journey to the Cradle was a solitary one, called “the flight of return”, taken by a Finch nearing the end of its life. Her mother had not been able to make this journey, so Talene would have to take her instead.

The journey, even by flight, took many days. Talene was slowed further by the burden she bore. She traveled in silence and reflected. This was the first time in her life that she had experienced silence for such a long stretch of time. There was nothing but the sun, the clouds, the wind, and her thoughts. She recognized the strangeness of the circumstances through her grief.The very last of a race that had soared since the age of dragons. A wise and ancient people, gone save one individual taking her mother on her flight of return. She looked out over the vastness before her leading to the plumes of billowing smoke from the cradle, still leagues away, and made her decision.

The heat of the Cradle was incredible, even from this height, even for Talene. She plunged down toward the source as cinders rose skyward, swirling around her. The acrid smoke singed her lungs as she dived ever closer and her feathers began to singe. She was the last. There would be none to take her on her final journey as she had taken her mother. She would have with her into the Cradle. Her wings were aflame to go and still she held on to the body. With a final call punctuating the existence of her people, she disappeared into the flaring crevice.

She opened her eyes. The flames danced around her on a lake of molten rock. The heat now was warm, comforting. Sparks danced upward to dark, winged silhouettes. Finches, more than she could possibly imagine. Among their outlines she spotted her mother. These were the ancestors. The entirety of her lineage, stretching back to the beginning. A joy unlike she had ever though possible washed over her, and a voice came from the swirling mass of Finches above.

“Our child. Here at last. All of us together, but it is not yet time. The age of Obsidians has passed, yet the of many others has not. They must persist until each of their threads reaches its conclusion. They cannot persist alone. We are gone, but still we are needed. You will return in new form. You will help them. You age will return to us when the others are safe. We will always be Esperia’ s children, and we will always send aid when She calls. Arise again in flame.”

The power of generations of Finches flowed into her. Her blood became lava. Her wings radiated the heat of a sun and the air shimmered and waved around her. She shot toward the heavens in her new form, a celestial. Fire trailed behind her in an orange streak, warmly illuminating the very land she would save.

“Flames to warm the good and purge the evil” 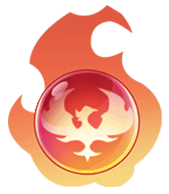 Heart of the Phoenix

A powerful and extremely rare stone that was forged within the Core’s Cradle. The flame that burns within it can never be extinguished.

Talene goes into ‘Phoenix’ form that lasts until death and converts 90% of her current health into a permanent shield of equal value, plus an additional extra permanent shield on top that is equal to 20% of her max health. Talene’s normal attacks will turn into close-range area attacks that deal 150% damage while in Phoenix form.

Talene calls down a fiery meteorite that deals 200% damage to a sing le enemy target. When Talene is in Phoenix form, meteorites will continually fall randomly every 0.5 seconds upon random enemy targets for a certain duration of time.

Every time Talene dies she transforms into a fireball. While in this state, Talene recovers 7% of her max health every second and cannot be targeted by her enemies but will still receive the positive effects of her allies’ abilities. Once Talene’s health reaches 50%, she is reborn, resulting in a brilliant explosion that deals 200% area damage to enemies. Talene’s Recovery Rate is reduced by 20% every subsequent time that she transforms into a fireball.

A passive ability that allows for Talene’s 2 weakest allies to respectively recover 150% of Talene’s Attack Rating as health each time Talene cumulatively loses 10% of her max health.