As a child, Lorsan yearned to know what was beyond the edges of the massive forest he called home. After thousands of years of habitation, most Wilders prefer to stay nestled among the towering trunks, hidden safely away from the world in leaves and shade. The majority of them never leave the woods, content to remain where they are comfortable. Where the others found comfort, however, Lorsan lived with a growing pressure to wander and explore. It was as if the weight of all the trees was pressing against his back, propelling him to the outside. It made sense then that he became a whisperer at a young age.

While it is true that most Wilders never leave the confines of their green haven, they are not entirely ignorant of the wider world. Nature doesn’t stop where forest gives way to field, it simply changes form. The wind whisperers listen to the breezes that travel over sea, mountain, and meadow to gather news from far away, staying apprised of the outside. Lorsan had been doing this throughout his childhood when his talent was discovered by Arden. Under the old sage’s tutelage, Lorsan quickly learned how to focus and direct his power. His talent was extraordinary, and soon he could draw so much from each gentle breeze that it was almost like he had traveled the wind’s journey himself. Still, this wasn’t enough for him. He was torn. He was compelled to explore, to put himself in the middle of strange lands, but he had a responsibility to his people. He was one of the most talented whisperers, and if he was away his talents would only benefit himself.

All of the sensations and insights the wind carried to him only made his wanderlust grow. He began to become truly discontent, and then eventually despondent at his circumstances. Arden took notice and told him “A good whisperer should listen not only to the wind, but also to his own heart”. He gifted the young whisperer with a staff and left him with a kind word. A brief farewell was scratched out on a bit of parchment, provisions were gathered, and by the morning, Lorsan had gone. It was time to see firsthand what the wind had hinted at. Lorsan was going outside.

“What can you tell me that the wind hasn’t already?” 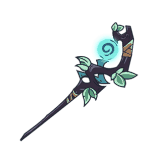 A staff gifted to Lorsan by the wise old sage, Arden. Although simple and unadorned, this staff is abound with a great natural power.

When an enemy linked by the ‘Gale Force’ ability dies, Lorsan will receive a permanent Haste increase until the end of the battle.

Lorsan summons a tempest amongst a concentrated area of enemies that continuously grows larger over time, dealing AoE damage multiple times to its surrounding enemies. Once reaching its maximum size, the tempest will explode, dealing 200% damage to nearby enemies.

Lorsan attacks an enemy for 200% damage and marks them with his inner sight symbol, which persists until the end of the battle. The symbol allows for the ultimate ability damage of all allied heroes to be raised by 200% against marked enemies for 5 seconds when an ultimate ability is used. This ability prioritizes unmarked heroes first.

Lorsan links the farthest and closest enemies together. When one of the two enemies receives any damage, the other will receive 80% of the damage received.

Level 121: If a linked enemy dies, the other surviving linked enemy will be stunned for 5 seconds.
Level 201: Transferred damage received by linked enemies is increased up to 120%.

Casts a shield upon two random allies which lasts for 7 seconds and is able to reduce damage equal to 250% of Lorsan’s own attack rating.

Level 141: Allies currently protected by the shield will have their dodge increased by 90 points. If the ally being protected is a Wilder hero, the shield’s value will be increased a further 20%.
Level 221: Value of shield is increased to 300% of attack rating value.