Athalia is a melee assassin for the celestials faction. She’s an extremely strong hero in all aspects of the game.

What makes Athalia truly unique is her “Judgement” skill. This ability will allow her to instantly teleport to the enemy that is opposite of the position she is placed in at the start of the battle.

She’ll then deal a huge amount of burst damage to that enemy and stop them from regenerating any energy for small period of time.

Due to the way this skill works, it basically means that you can manually target any hero on the battlefield for her to attack at the start with high burst damage. No other hero in the game can do this.

What isn’t shown in the skill description is that she will actually knockback the enemy when she teleports to them, and then she’ll immediately transition into using Purging Frenzy. This will further knock them back (usually into the middle) and stun them.

The option of choosing which enemy to nuke down at the start of the battle is priceless. It will win you battles, and make progression much easier.

Athalia’s one major downside is her ascension requirements. She can only be ascended by using copies of herself.

That means you’ll need exactly 14 Elite copies of her to obtain an Ascended version. After that, you’ll need 10 more copies for +5 stars.

She is extremely hard to obtain at a high ascension for the majority of players. However, she can still be very strong at legendary or mythic.

However, you can buy an Elite copy of her from the challenger store for 250k challenger coins. This means that you can technically guarantee to acquire her at Ascended eventually, although it’s going to take a long time.

The average player can probably expect to obtain one guaranteed copy of her per month, depending on their legends’ challenger rank and how lucky they get with obtaining challenger coins from wrizz hard mode in the arcane labyrinth. Of course, she can just be randomly pulled from summoning as well, but it’s unreliable.

If you want to fast-track her acquisition, the only way is through the Stargazer NPC in the noble tavern. The hero obtainable here is rotated every day, so she won’t be available from it most of the time. It costs diamonds or stargazer cards to use it, so you might want to save any cards you get for when she’s available.

Another unique feature of Athalia is perhaps not entirely herself, but the faction she belongs to. She’s a member of the powerful Celestial Order, and that allows her to represent any faction on the battlefield.

As an example, if you only have 2 heroes of the same faction on a team and you add her to it, she will count as the third member of that faction and grant the bonus.

This bonus is INSANE. It basically allows her to be added to any team with no downsides.

Athalia’s Judgement can stop certain enemies from using their special abilities at the start of the battle.

Athalia could be described best in her current form as a living weapon. She was once a mortal woman, but after being Ascended by Dura and made a demigod to serve in the Celestial Order, she wields incredible power.

Athalia has always found Dura’s kindness for mortals perplexing. The mortal’ behavior often dishonored the very gods they claimed to revere, but Dura would always find a way to forgive their transgressions.

“They are imperfect, but are our creation nonetheless. We may guide them, but they will forever stray from the path. We must be there to see them back on it. Have pity on them and try to understand. They possess a spark that we do not.”

Athalia couldn’t help but feel the burning twinge of jealously at these sentiments. Were their hearts not blighted? Prone to the sickness of greed and hatred?

“They must suffer that which we do not. We forget what it is to exist under the yoke of disease, hunger, poverty, the constant loss of the things we cherish. To be mortal is to love no less than a Divine, but to do so with the knowledge that all of it will inevitably be torn away from you. To be a mortal is a symphony of joy and pain. To be mortal is to be imperfect and complete. It is imperative to remember who they are when you approach them.”

After Dura’s death, Athalia’s resentment of these creatures was cemented, the last remnants of her humanity forgotten. Had her goddess not intervened on their behalf, had she simply allowed her creation to fend for themselves, she would still exist. The most important thing, however, remained the same as ever. The preservation of The Light is the highest calling, and even some of the pitiful creatures that lived such petty, short lives were instrumental in this preservation. Athalia, however, was created as executioner as well as adjudicator, and her viewpoint is seldom nuanced. There is right and wrong in the world. Good and evil. Evil must be expunged.

Athalia now seeks out and destroys blasphemers with righteous fury. Those who dabble in the dark arts or conspire to aid the Hypogean conquest do so at the risk of becoming another body crumpled under her blessed blades. Her godless quarry are often discovered with their eyes charred and burst, lost to the light and the glory of this surviving avatar of Dura’s justice aspect. Athalia is an indispensable ally in the fight against the demonic armies, but she is a double-edged sword. Whomever wields her should expect to pay with a little pain of their own.

“I am Justice. I cannot be judged.” 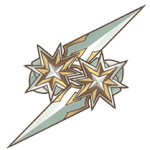 An ethereal ring of light capable of driving away nightmares.

Defense rating is increased by 4% of the value of Athalia’s attack rating.

Athalia attacks her enemies with lightning speed and precision, slashing them three times from various positions on the battlefield. Each slash deals 160% damage to all enemies in her path. The third slash has a 100% critical strike chance.

Level 81: Enemies that are struck more than once are dealt an additional 50% damage.
Level 161: Damage increased by up to 190%.

Athalia descends from the heavens onto the battlefield and targets the enemy directly opposite her, inflicting 280% damage on them. Once the initial attack has finished, Athalia will stand and attack the targeted enemy normally. Enemies will not be able to regenerate energy when attacked by this ability.

Athalia unleashes a multi-staged attack on the enemy nearest to her, with the final blow dealing 150% damage to the target that also leaves them stunned for 2 seconds.

Athalia uses a divine aura that allows herself to mitigate 8% of all received damage for every ally still alive on the battlefield.